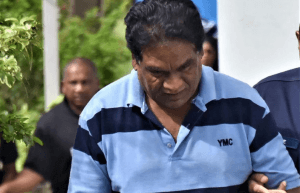 (TRINIDAD EXPRESS) – An appeal filed by a former police officer who was sentenced to 17 years’ imprisonment in 2017 after he was found guilty of raping a 17-year-old girl at the San Fernando Police Station in 2001, has been dismissed.

A three-judge panel at the Hall of Justice in Port of Spain, on Wednesday unanimously dismissed the appeal filed by attorneys on behalf of Harry Ramlochan. While one of the judges, Justice Judith Jones, agreed with two of the grounds raised by his attorneys, the court ultimately found those errors made on the part of the trial judge were not prejudicial to Ramlochan based on the totality of the evidence.

“Keep strong, I’ll see what I can do,” he said, before being led out of the courtroom by Court and Process Branch officers.

He was charged with raping the girl on May 5, 2001, after she and her mother went to the police station to file a report of the mother being beaten by a male relative.

According to the State’s case, Ramlochan took the mother into the station after which he said he wanted to take a statement from the girl. Her mother advised her to go with him. At this point, he took her to a dormitory where he asked her whether she ever had sex. She informed him she was waiting until marriage.

But in spite of this, Ramlochan attempted to hug and kiss her. She resisted. Ramlochan eventually left the station with the girl but later returned and offered her a drink of alcohol but she refused. She also refused to accept $70 that he offered.

She was then taken to the Court and Process office before Ramlochan closed the door, pushed her against a cabinet and forcefully kissed her and bit her lips. She was then pushed against a wall. Ramlochan proceeded to remove her pants and underwear, pushed her on a piece of sponge on the ground and raped her.