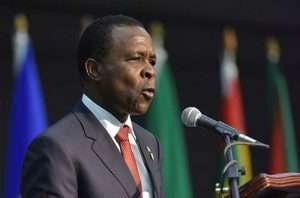 Dr. Mitchell urged persons to speak out against abuse, which according to him, has no place in our society. He said opting to remain silent on such an important issue is equivalent to being complicit.

Delivering his 2020 Independence Day Address, the Prime Minister said, “Let me state categorically that child abuse in any form, has no place in our society, or any society for that matter. As a Government, we are unable to fight this scourge alone and so we call on the churches, family members, mothers, fathers, societal leaders, members of the community, let us all continuously speak up and speak out against this serious issue. When we stand in silence and allow it to occur, we become equally complicit in this travesty.”

The Prime Minister gave assurances that Government will do all within its power to tackle child abuse. He said, “The Government would make every effort to strengthen the law and other infrastructure to deal with the perpetrators and seek recourse and assistance for the victims; however, our preference is to not have any victims at all.”

According to statistics from the Royal Grenada Police Force, there were 179 victims of child abuse in 2019, down from 294 in 2018, which reflects a 39% reduction. Statistical data also reveals that children between the ages of 13 and 16 are most affected.

Inspector Andrea Noel-Victor of the Special Victims Unit (SVU) said the RGPF has a zero tolerance approach to child abuse and they are hoping to see a further reduction in the number of victims as they move aggressively to deal with perpetrators.

She said, “We have been focusing more on public awareness and sensitisation of children and others in the community, through lectures in schools, meetings with Parent Teacher Associations and other community level engagements. We are seeing a growing level of confidence in the unit and more and more victims are coming forward to report these crimes. In fact, we just had a victim come forward after 20 years and charges have been laid against the perpetrator.”

The RGPF is also placing emphasis on training to enhance the ability of police officers to deal with these sensitive cases.

Inspector Noel-Victor confirmed that the RGPF has developed a holistic response, working in tandem with the Ministry of Social Development, the Child Protection Authority and other entities involved in the fight against child abuse.

She noted too that the courts are very responsive in dealing with such cases and they are usually successful in getting matters expedited, particularly as they relate to protection orders stemming from incestuous cases.