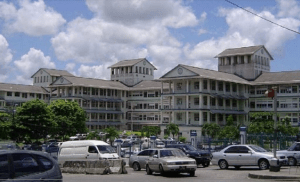 (TRINIDAD EXPRESS) – Police were called to the San Fernando hospital on Monday after a newborn baby boy was brought in unresponsive after a home delivery in Debe.

Police said they were told by a doctor that the infant appeared to have injuries to its skull, chest, scrotum and an arm.

The father of the child said, however, that he and paramedics attempted cardio-pulmonary resuscitation at his home to help the baby breathe.

Around 6.20 a.m. a doctor at SFGH contacted San Fernando police and reported that a child was brought in unresponsive and was pronounced dead at the emergency department.

Cpl Bachus and Pc Harripersad responded and upon arrival interviewed the doctor.

Police were told that the mother, a housewife of Lalbeharry Trace Extension, was brought in by Emergency Health Services personnel with an unresponsive baby.

One of the police officer viewed the body and observed the injuries which appeared consistent as reported by the doctor.

The officer also met the mother in the hospital’s resuscitation room and spoke with her.

The Express contacted the child’s father, a 28 year old barber, who said that he followed the instructions as was given over the phone by the EHS officer.

The father said his wife was 37 weeks pregnant, and they also have two children – a boy three years old and a girl two years old.

The father said: “Everything was going smoothly with the pregnancy until yesterday (Sunday). She had a little pain before went to sleep but she said don’t bother to call the ambulance, she will hold on until the morning when she had to go to the clinic. But she woke me up around 2.30 a.m. and said the labour pains coming in very strong. I called the ambulance and they advised me what to do”.

“After she lay down, in less than ten minutes she started to get serious contractions, they started to come more closely. The baby came out but was not responding or moving at all. I told the woman on the phone about it and she was advising us how to perform CPR on him. They told us to take our two thumbs and pump the baby’s chest. We tried for about five minutes and then the ambulance reached. They (paramedics) cut the cords and they brought a suction pump and pumped by his nose and mouth”, he said.

“We did not have to pull out the baby. We do not know about any bruises. There was no amount of force, because in no time at all the baby came out. We cleaned him up and wiped him up. But he was not moving at all. No cry no movement”, he said.

The mother is warded at hospital.

An autopsy is expected to be done on Tuesday to ascertain the cause of death.