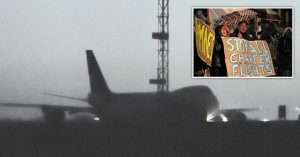 BBC- A Home Office flight deporting convicted offenders to Jamaica has left the UK, despite a last-minute legal challenge.

Downing Street said 17 people were deported, but 25 others had been stopped because of the court order.

The court ruling came on Monday night after concerns that some detainees may not have had access to legal advice.

One woman, whose husband was taken off the flight, said there was confusion over what would happen next.

All of those being deported are Jamaican nationals who have been convicted of criminal offences and given prison sentences of 12 months or more.

In a statement, the prime minister’s spokesman said “we bitterly regret” the court decision that stopped the 25 people from leaving, and will urgently appeal.

“The offences which these people were responsible for include one manslaughter, one firearms offence, seven violent offences, two which are in the category of rape or sexual offences and 14 drugs offences,” the spokesman said.

He added: “We make no apology whatsoever for seeking to remove serious foreign national offenders.”

On Monday, a Court of Appeal judge ruled the government should not deport detainees from Colnbrooke and Harmondsworth detention centres, near Heathrow, after lawyers argued mobile phone signal problems meant some of the detainees could not get legal advice.

The ruling said the government must not deport anyone from those centres unless they had access to a functioning, non-O2 Sim card on or before 3 February.

There had been calls for the government to suspend the flight until a report on the Windrush scandal has been published.

A leaked draft of the report said the government should consider ending the deportation of foreign-born offenders who came to the UK as children.

Campaigners argued that most of the detainees due to be deported had spent the majority of their lives in Britain.

Bella Sankey, director of charity Detention Action, told the BBC News Channel: “In these cases where people have been here for a long time and are to all intents and purposes British, by deporting individuals like that you are doubly punishing them.

“For many of these individuals deportation is a much harsher sentence than the time they’ve already served. Imagine being forever banished from the country you grew up in, unable to visit all of your close family and friends.”

Immigration lawyer Jacqueline Mckenzie told the BBC’s Victoria Derbyshire programme: “There needs to be a moral debate about this because it cannot be right that we are picking up people in their 30s who arrived at two… and sending them to countries that they don’t know, leaving behind all their family.”

Tottenham MP David Lammy said it was an “outrage” that the flight had departed.

“The government wants to give the impression that everyone who was deported was a hardened violent criminal, but the reality is many of those who were scheduled to be deported had committed non-violent, one-time drugs offences.

“The lessons from Windrush have not been learned. Lives are being ruined because we don’t remember our history.”

Tonique Kerr said her husband, Reshawn Davis, who has been in the UK for 20 years, was among those told on Monday that he would not be on the flight.

Ms Kerr said her husband had been sentenced to 14 months in prison – although only served two months – under the controversial joint enterprise law, after two mobile phones were stolen and he was “just there when it happened”.

Shabana Mahmood MP said one of her constituents had also been taken off the flight.

“He actually served in the British Armed Forces,” she said. “He did two tours of Afghanistan, when he came back he suffered from post-traumatic stress disorder.

“He was diagnosed with bipolar disorder and that sort of began the deterioration of his mental health, after which he was convicted for GBH.

“His mental health has continued to deteriorate and his argument has always been: he’s served this country, he hasn’t had help for the PTSD he picked up as a serving soldier for our country.

“So it really goes to the heart of our notions of what it is to be a citizen.”

The flight had been due to leave for Kingston at 6:30 GMT on Tuesday.

Chancellor Sajid Javid said no-one protected by the court ruling was on the flight.

“It is absolutely right that when they have served their sentence that we send them out of the country,” Mr Javid told BBC Radio 5 Live on Tuesday morning.

“They are not British nationals, they are not members of the Windrush generation, they are all foreign national offenders.”

On Tuesday, the Home Office said: “Today 17 serious foreign criminals were deported from the UK. They were convicted of rape, violent crimes and drug offences and had a combined sentence length of 75 years, as well as a life sentence.

“We make no apology whatsoever for seeking to remove dangerous foreign criminals.

“We will be urgently pursuing the removal of those who were prevented from boarding the flight due to a legal challenge over a mobile network failure.”

And the PM’s spokesman said: “The legal process for removing these offenders – which has included repeated appeals and judicial reviews – has already cost the British public tens of thousands of pounds.

“The taxpayer will now be left with an even bigger bill and the prospect of convicts who are considered to pose a threat to the UK being granted bail while this matter is resolved.”

‘I have no-one in Jamaica’

One of those who had been due to be deported on Tuesday is father-of-five Howard Ormsby.

He was jailed for 18 months after he was convicted of possession with intent to supply class A drugs and he was released in December.

“I came here at the age of 15 with my older sister and I’ve been here 18 years of my life,” the 32-year-old said, speaking to the BBC’s Victoria Derbyshire show from a detention centre at Harmondsworth, west London.

“I’ve never tried to deny the fact I’ve made a mistake, but everyone has a chance to right their wrongs.

“I have all my family here – I have no-one in Jamaica.”