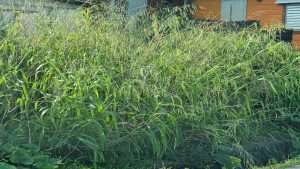 loopslu.com- Residents who refuse to keep their premises clean will soon be fined.

That according to Minister for Social Transformation and Local Government, Lenard Montoute who says that legislation will soon be put in place to ensure that property owners take responsibility for the de-bushing on their property.

“That I know is inadequate because the vast expansion of development happening in the various constituencies, to take care of every area would be a challenge,” Montoute said

However, according to the Gros Islet MP, the government should not be paying to cut bush around people’s property.

The responsibility should be that of the property owner.

“I am saying and I am speaking now as Minister for Local Government, it is my intention at some point to ensure that we have legislation in place for people to take responsibility for the upkeep of the surrounding around their property,” Montoute stated.

The MP recalled several instances when people would come to his constituency office, complaining about the overgrown bush in the area and the government would have to foot a bill to ensure that the bush is cut.

According to him, “I think it should not be that way; we are talking about security and safety…It is a safety hazard, it is a haven for criminals and so that is a concern and I know public areas along the highways and government properties, we will try to do a better job in ensuring that it is done,”

Abandoned properties will also be included.

“It is supposed to be done by planning but I am going to request it be done by local government because they have direct interaction and oversight of the areas of abandoned and unoccupied properties, that they are maintained by the owners of these properties.”

Similar measures will take effect as of April 2020 in Barbados.

In December 2019, Barbados Prime Minister Mia Mottley announced that her administration will be enforcing such laws.

Barbadians were given 3.5 months of sensitization and letters of warning as the legislation was being put in place before the Government introduces “A series of civil penalties so that people will be ticketed” for not cleaning their properties.

According to the Barbados Prime Minister, “The penalty was necessary because this country will end up in economic problems again if there is a public health crisis in the middle of a tourism season or if we have a “public health crisis” among the population that affects productivity.”