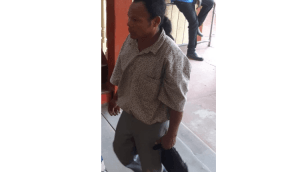 newsroom.gy- A 44-year-old labourer was on Wednesday remanded to prison by Magistrate Rhondel Weever at the Diamond/Grove Magistrate’s Court for killing his brother.

Edley Kennedy Jacobs of Blueberry Hill, Linden was not required to plea to the charge which alleged that on February 2, 2020, at Soesdyke Public Road, East Bank Demerara, he unlawfully killed his twin brother Winford Jacobs.

According to reports, Winford and Edley were consuming alcohol along the Soesdyke Public Road together when an argument ensued.

During the argument Winford attacked Edley with a glass  bottle. However, Edley, who was armed with a knife, stabbed Winford twice about the body.

Winford collapsed on the side of the road and was later found by a passerby who rushed him to the Diamond Diagnostic Centre, East Bank Demerara. He was pronounced dead on arrival.