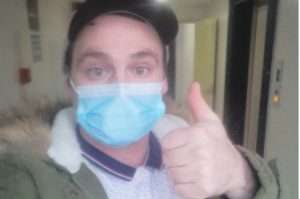 (NEW YORK POST) – The first Briton believed to have been diagnosed with coronavirus reckons he cured himself with “hot whisky and honey.”

Teacher Connor Reed, 25, told the Sun that he thought he was “going to die” when he was hospitalized two months ago in Wuhan, the Chinese city at the center of the outbreak that has killed more than 360 people.

Yet he claims he refused to take antibiotics — and instead used an inhaler and “drank a hot whisky with honey until that ran out.”

“It’s an old-fashioned remedy but it seemed to do the trick,” he told the UK paper. “I am proof coronavirus can be beaten.”

Reed, who moved to Wuhan last summer to teach English, went to a hospital after a bad cough left him struggling to breathe, he said.

After two weeks in the hospital, he was finally discharged — and only later learned that he had been diagnosed with the virus that has sickened more than 17,000 people around the world.

“I was stunned when the doctors told me I was suffering from the virus,” he told the Sun. “I thought I was going to die but I managed to beat it.”

“My kitten caught the feline coronavirus and developed pneumonia and died, but I don’t think I caught it from her,” Reed told North Wales Live. “I think that was just coincidence.”

It’s unclear whether the cat was suffering from the same strain of the coronavirus since there have been no reported cases of pets contracting the illness currently gripping China.

“No particular event has been reported in any species,” the World Health Organization said.

Meanwhile, Wuhan is “becoming a real ghost town,” Reed told the paper, adding, “The authorities are really worried about how to contain this and stop it spreading.”

He claims Britain’s Foreign Office was “disinterested” when he called to say he had been diagnosed.

“They kept asking if I wanted a place on a flight out but I said no. I’ll stick it out here,” he told the paper.

Public Notice – Closure Of One (1) Lane At Old Fort Road

Coca-Cola Grenada Launches National Refresh And Win Promotion With Over $30,000 in Cash And Prizes

Public Notice – Closure Of One (1) Lane At Old Fort Road

Coca-Cola Grenada Launches National Refresh And Win Promotion With Over $30,000 in Cash And Prizes

US Citizen Charged For COVID-19 Violation