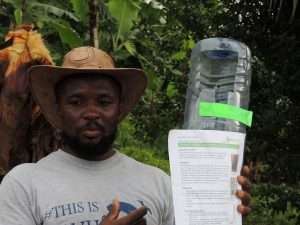 The Coconut Beetle first emerged 1955, which was under control for many years; however, 2003 it re-emerged and has been affecting production since.

The Ministry started an education drive, through Mr. Troy Augustine, Agronomist within the Ministry of Agriculture and Lands, who is responsible for coconut. In 2019, Mr. Augustine commenced an outreach with the aim of continuing to the educate  farmers on the best way of containing the beetle, thus significantly reducing the negative effects on the coconut subsector.

The Coconut Beetle, which is also called the South American Palm Weevil, lives in oil palm and dead trunks of coconut trees, and is mainly seen in the dry season; early in the morning or very late in the evening.

“The action of this beetle is to lay eggs at the top of the coconut, the Larvae is turning inside of the coconut tree and it would eat the whole inside of that tree. Then, you would have small nuts dropping, the leaves turning yellow, and you will start to see the tree oozing a lot of liquids.” Augustine said.

On Thursday, January 30, 2020, at a farm located at Belvedere, St. Andrew, Augustine coordinated a field training with farmers in that area, highlighting controlled measures for the pest.

The most effective means of catching the beetle is the use of a trap made from plastic bottles, which works with sugarcane as the feed.

The Ministry remains committed to working with farmers through its education drive aims at empowering  farmers in the fight towards the eradication of the coconut beetle. The Ministry will continue with its outreach throughout 2020.