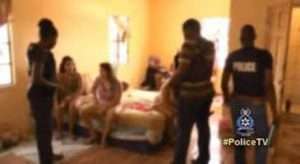 trinidadexpress.com- POLICE are not doing enough to protect Venezuelan migrants from exploitation.

Diquez was speaking at a panel discussion on human trafficking hosted by the Franciscan Institute and held at The University of the West Indies (The UWI) Chaplaincy in St Augustine on Friday evening.

Diquez, who was a member of the audience, became emotional during the question-and-answer segment, as she said the hardships in Venezuela had opened young Venezuelan ­women to trafficking and other crimes.

She claimed there were criminal elements in T&T reaching out to “university girls” in Venezuela and manipulating them into coming to T&T, where they were exploited and abused.

“We actually have T&T Facebook accounts showing the faces of these little girls in university being practically sold in Trinidad,” she said. “It breaks my heart to see how mothers and family members are asking for support (to find) their missing loved ones who are actually here.”

It was at this point Diquez started crying.

She said the police often turned a blind eye to what are obvious cases of exploitation.

Giving an example, Diquez said there is a popular car wash in San Juan, where scantily-clad Venezuelan girls are the main attraction.

She said she observed police passing by the establishment, seeing girls who were “practically naked” washing cars in a bar, but doing “absolutely nothing” to stop it.

Afraid to go to police

Diquez said Venezuelan women who are being exploited are often afraid to go to the police for help ­because they are in the country ­illegally and they fear being sent to the Immigration Detention Centre.

Several people in the audience expressed views that the police were complicit in human trafficking.

However, Gender-Based Violence Unit manager Pollard said migrant women can feel safe in accessing help from the unit, as it does not report anyone to ­Immigration.

She said this is because there is a demand for commercial sex in T&T, and young people are ­often enticed by the money.

Men are also at risk, she ­noted.

Men can make thousands of dollars per night in the sex trade, and she noted that for university students struggling to pay their fees or for young people tasked with financially helping their ­families, this might be a tempting avenue.

She cautioned young people to be wary of social media, as this is one of the ways traffickers tend to recruit victims. They prey on vulnerable people who are longing for attention and affection, she said.

Attorney Bhagan called for more funding for the Office of the Director of Public Prosecutions.

He noted that despite several high-profile arrests, not a single person has been convicted of ­human trafficking in T&T to date.

“It is very important for the DPP department to receive more funding and more staff, and to create a specialised unit for the prosecution of human trafficking crimes in this country in order to increase the speed and the rate of conviction of these crimes,” he said.