Mikey Live
HomeRecentGCA’s Thrust Towards The Use Of Renewable Energy In The Drying Of...
Recent 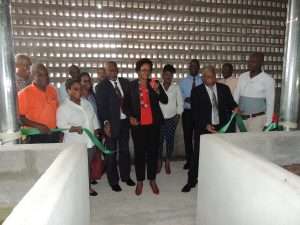 Ministry of Agriculture & Lands – The use of renewable resources is essential to transforming the agricultural sector, through  increased productivity, thus maintaining economic stability. This will also minimize demands for the utilization of finite natural resources, which can have a positive impact on our environment. The use of renewable resources is one of the approaches used by the Grenada Cocoa Association (GCA) to enhance the process of drying their cocoa beans at one of its facilities. GCA through funding and technical support from the Global Environmental Facility (GEF) commissioned its first Solar Drying Wall at the Mt. Horne Cocoa Fermenting Station.

During the launch of the operation on Thursday 30th January 2020, the Minister for Agriculture and Lands Hon. Yolande Bain – Horsford  cut the ribbon to open the facility. She also applauded the initiative as one which adds to the thrust of building climate resilience.

“There is no denying that the advent of climate change requires developing states like ours to build resilience and this project is certainly part of this thrust. [Given that] this project seeks to increase Grenada’s Cocoa drying capacity in a clean, sustainable, cost effective manner.”

The first phase of the project is completed at a cost of USD 166,851 with USD89,593 contributed by GEF. This technology utilizes energy from the sun to produce heat as an alternative to burning hydrocarbons. This will create a product that is free of Polycyclic Aromatic Hydrocarbons (PAH) contaminants, increase drying capacity; reduce energy costs and create resilient infrastructure for thousands of farmers.

This environmentally friendly approach, according to Chairman of the GCA, Mr. Christopher Williams, propels the organization to make further advancements in the cocoa sector and safeguard the industry.

“We are well on our way to pursue projects that conserve biodiversity, restricted use of persistent organic pesticides, capacity building projects and engage in climate change resilience projects. The Solar drying system, Jouvay Chocolate Factory, crop insurance, renewable energy, the production of low cadmium cocoa and restricted use of farm chemicals are some of our strengths as we go forward.”

The GCA’s Chairman went on to say, “At the start of the Cocoa production this year, we increased the cost by ten (10) cents. I am pleased to announce that as from Monday morning (February 3rd 2020)   the price of cocoa will go back to one dollar and fifty cents (1.50).”

According to the Minister this project, “epitomizes the notion of true sustainability since it addresses the issues of the people, the planet and the profits. This notion fits well with the theme of this year’s Independence celebrations:” preparing for the future through empowerment growth and long-term sustainable development, “she added.

The Ministry of Agriculture and Lands, congratulates and extends best wishes to the Grenada Cocoa Association (GCA) , as it endeavors to  utilize this sustainable agricultural technique, which has the ability to ensure food and nutrition security for all.

Facebook
Twitter
Pinterest
WhatsApp
Previous articleGovernment Says Claims Of Coronavirus At SGU Are Baseless, False, Mischievous And Designed To Create Fear
Next articleThe Thrust Towards The Eradication Of The Coconut Beetle