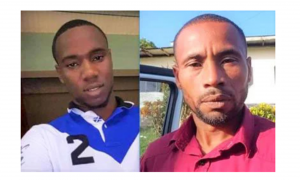 (TRINIDAD EXPRESS) – A La Romaine man was shot dead at his home on Tuesday night.

Jason Calliste, 41, was standing in his front yard at Cedar Grove Drive, when he was shot at around 10pm.

Calliste, a truck driver at the San Fernando City Corporation, was shot twice.

He ran a short distance and collapsed in a drain at the side of the house.

The shooter escaped in the vehicle.

In a separate incident, a man was shot dead in Maloney on Tuesday night.

He was identified as 22-year-old Isaiah Cox.

Police said Cox was liming with a friend at his Flamingo Boulevard home when two men entered at around 10.30pm.

Cox was shot in the chest and stomach.

His friend was hit in the left leg.

The men were taken to the Arima District Hospital, where Cox died while being treated.

His friend remains in stable condition.