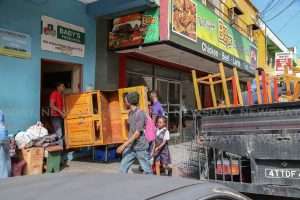 newsday.co.tt- The doors of Baby’s Preschool, along Independence Square, Port of Spain, closed for the last time on Wednesday afternoon, almost 30 days after its principal and founder Jezelle Philip was stabbed to death near the compound.

Newsday went to the scene and saw parents and other workers assisting with loading appliances and furniture from the school onto a truck.

The man assisting with the removal of the items said three of his children attended the school and wanted to help the teachers with the movement of the furniture.

“I got here at around midday but, by the time I reached, the things were already put out on the pavement. I was told that some people came and took things already, so I got a truck and came back to move the items.

“It’s really sad. I hoped he (the landlord) would have given the teachers more time to pay the rent in light of what happened this month alone. I understand even the police tried to appeal to the guy to give them an extension, but I suppose I can understand that it’s a business he’s trying to run as well.”

The parent said he did not know where the furniture would be stored. The fridge and microwave were being sold on the spot outside the school to passers by.

Philip’s mother also helped in the moving the furniture out of the building but declined to comment on the matter.

Newsday was told the owners of Baby’s Preschool owed the landlord $30,000 in rent. Newsday attempted to speak to the owner of the building who was also present but he declined to comment.

One parent said it was unfortunate the school had to be closed as it provided a convenient means for parents living in east Port of Spain.

“I work in Chaguaramas, so on a morning I would drop off my daughter here. These weren’t people who were only interested in making money. They had a sincere passion for what they did. Now a lot of parents are going to find another place to put their children.”

Philip, 43, was stabbed to death on January 6, by a man allegedly known to her. The man, police said, walked into the Besson Street police station and surrendered moments later.