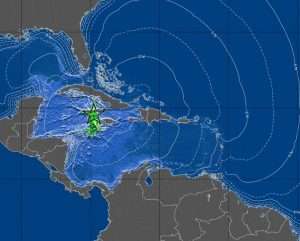 It was centred 139 kilometres northwest of Montego Bay, Jamaica, and 140 kilometres west-southwest of Niquero, Cuba. It hit at 2:10 p.m. ET, and the epicentre was a relatively shallow 10 kilometres beneath the surface.

There were no immediate reports of damage or injuries, but the quake triggered tsunami warnings for Cuba, Jamaica and the Cayman Islands. “Hazardous tsunami waves,” are possible within 300 kilometres of the epicentre, the International Tsunami Information Center said.

Tsunami waves reaching as high as one metre above the tide level were possible for coastal parts of Belize, Cuba, Honduras, Mexico, the Cayman Islands and Jamaica, it said.

The quake could be felt strongly in Santiago, the largest far-eastern Cuban city, said Belkis Guerrero, who works in a Catholic cultural centre in the centre of Santiago

“We were all sitting, and we felt the chairs move,” she said. “We heard the noise of everything moving around.”

She said there was no apparent damage in the heart of the colonial city.

“It felt very strong, but it doesn’t look like anything happened,” she told The Associated Press.

In the Cayman Islands, the quake left cracked roads and what appeared to be sewage spilling from cracked mains. There were no immediate reports of deaths, injuries or more severe damage, said Kevin Morales, editor-in-chief of the Cayman Compass newspaper.

The islands see so few earthquakes that newsroom staff were puzzled when it hit, he said.

“It was just like a big dump truck was rolling past,” Morales said. “Then it continued and got more intense.”

The disaster management agency for the Cayman Islands government on Twitter urged people to move away from coastal areas and said that those in low-lying areas should “evacuate vertically” in strong multi-storey buildings.

Dr. Stenette Davis, a psychiatrist at a Cayman Islands hospital, said she saw manhole covers blown off by the force of the quake, and sewage exploding into the street, but no more serious damage.

Claude Diedrick, 71, who owns a fencing business in Montego Bay, said he was sitting in his vehicle reading when the earth began to shake.

“It felt to me like I was on a bridge and like there were two or three heavy trucks and the bridge was rocking but there were no trucks,” he said.

He said he had seen no damage around his home in northern Jamaica.

The USGS initially reported the magnitude at 7.3.