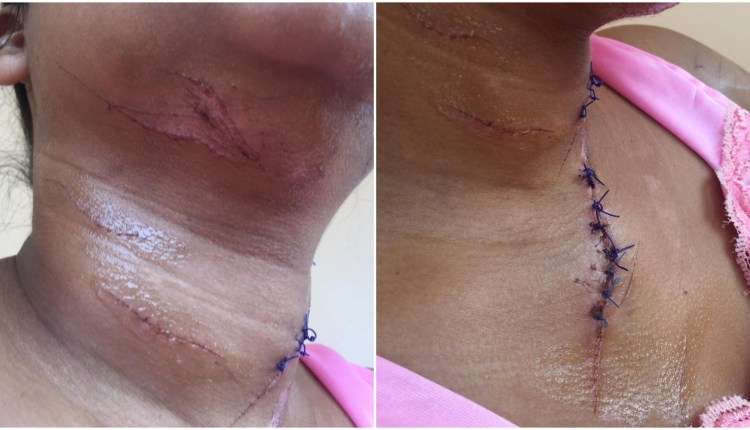 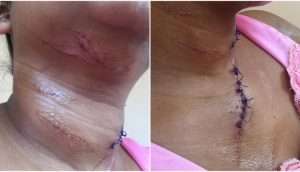 (NEWS ROOM GUYANA) – A 24-year-old mother of one is thankful for life after she was brutally chopped by her 27-year-old reputed husband Ganesh Narine before he hanged himself in the wee hours of Saturday last.

Nalesha Ragoonauth of Bush Lot Village, East Berbice-Corentyne was released from the New Amsterdam hospital Monday after being treated for wounds to the neck, wrist and forearms.

In recounting the horrific incident, the young mother told the News Room that she begged Narine not to kill her and pleaded with him to let her live for the sake of her eight-year-old son.

Ragoonauth and Narine shared a four-year relationship – one that was marred by physical and verbal abuse – but it was her decision to end the relationship that led to her attempted murder and his suicide.

Ragoonauth told the News Room that she informed Narine of her decision but later accompanied him to a birthday party at the neighbour’s house.

There, he imbibed and so she left the party at around 21:30hrs and went home. The young mother said she went to sleep with her son but Narine arrived home an hour later and begged her not to leave the relationship but she did not budge.

She was later awakened by a stinging lash on her arms and realized that Narine climbed over the wall; he immediately attacked and chopped her as she begged for her life.

“He said ‘me chop you up bad already and you nah gun live… let me kill you.’ Me begged him leh me live for my son because we grew up without a mother and know how hard it was for us but he said my brother and sister will take him to the police and he start to put the chopper to me neck and start to rub it,” a traumatised Ragoonauth said.

By that time, her son woke up and escaped. Ragoonauth said she mustered all her strength despite bleeding profusely and managed to push Narine out of her way as she escaped.

“The chopper fall out he hands and me run out the door but by the time me reach outside I tell me son to call he uncle to see what happen to me cause me start to feel dizzy,” the mother recalled.

She eventually collapsed and lost consciousness. Ragoonauth learnt of Narine’s death when she regained consciousness at the hospital.

Now on the road to recovery, Ragoonauth is advising abused women in abusive relationships to get help.