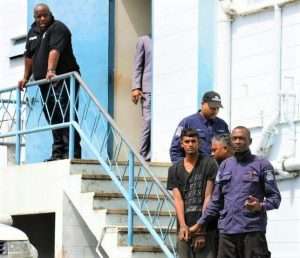 (TRINIDAD EXPRESS) – Shane Ramjattan, the man who lied about being kidnapped, has been fined $600.

He was given a week to pay the fine or he will two serve months with hard labour. He was charged with wasteful employment of police time by making a false report to constable Majid Khan that he was kidnapped.

When arrested, Ramjattan told the police that he “I gamble out the boss man money. I real sorry”

In court he said, “I apologize to the whole country and everybody for my stupid mistake.” He told the police “Thanks for showing concern for me in the bush and walking all over and wasting your time. It won’t happen again.”

Ramjattan, 24, reported that he was kidnapped, taken into a forest camp and forced to pack drugs and clean high-powered weapons.

He also told his father that he was taken on a boat ride to Venezuela.

Ramjattan, a father of two, was taken into police custody on Monday afternoon.

He gave a statement and was kept overnight. He was reported missing by his parents on Wednesday night after he did not return to the family’s Rochard Road, Penal, home. The three-tonne truck he was driving was found the next day.

On Saturday, Ramjattan was found walking along Penal Rock Road. Residents recognised him as the missing man and contacted his family.

Ramjattan said he was kidnapped by two Spanish-speaking men and taken to a forest camp. He was blindfolded and forced to work for the men. Ramjattan said packed drugs into wooden crates and cleaned about seven guns. He was then released. Ramjattan’s mother made a tearful appeal for her son. She refused to eat causing her to fall ill.

His father led a search party into the forest.