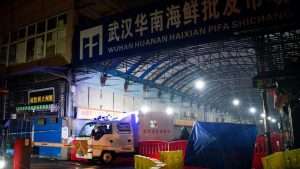 (SKY NEWS) – The new virus that has killed 17 people in China is mutating and could spread further, health officials have warned, as Britain announced measures to monitor flights arriving from the country.

Transport Secretary Grant Shapps told Sky News a “separate area” is being set up at Heathrow, as airports around the world step up screening of travellers arriving from affected regions at the centre of the coronavirus outbreak.

As a result, Health Secretary Matt Hancock has put in force a series of measures to guard against the outbreak. These include:

An audio message is to be broadcast to passengers on incoming aircraft to encourage them to report any illness
Captains will be authorised to warn airports of any ill passengers on board flights while the aircraft is in transit. A response (nil or otherwise) will be requested no later than 60 minutes before the actual arrival time

Mr Shapps said: “There have been some announcements this morning about flights that come direct from the affected region to Heathrow with some additional measures there.

“Obviously we want to stay ahead of the issue so we are keeping a very close eye on it.

“Initially this is to ensure that when flights come in directly into Heathrow there is a separate area for people to arrive in.”

A Heathrow spokesperson said: “The welfare of our passengers and colleagues is always our main priority and we are working with the government to support the implementation of enhanced monitoring measures as a precaution.

“We would like to reassure passengers that the government assesses the risk of a traveller contracting coronavirus to be low. We would encourage anyone with individual questions or concerns to refer to guidance from Public Health England and the Foreign Office.”

The action comes as China state media reports the number of coronavirus cases in Hubei province has risen to 444, with 17 people now confirmed dead.

Overall 473 cases of coronavirus were confirmed by Chinese authorities, as millions of people prepare to travel domestically and abroad for the country’s lunar new year celebrations starting this week.

Another 2,197 cases of close contact with patients have been recorded and there is evidence of “respiratory transmission” of the virus, national health commission vice-minister Li Bin told reporters, in the body’s first major news briefing on the outbreak.

Fifteen medical personnel are among those infected in the country, with symptoms including fever, coughing and difficulty breathing.

There is no vaccine for the new viral infection, which can cause pneumonia and can be passed from person to person.

Though the origin of the virus has yet to be identified, the World Health Organisation (WHO) said the primary source is probably an animal.

The virus originated in the central city of Wuhan in Hubei province at the end of last year and has since spread to Beijing and Shanghai.

Cases have also been found in the US, Thailand, South Korea, Japan and Taiwan. All of these involve people who had recently been in Wuhan.

Hong Kong – and the autonomous region of Macau – each recorded their first case of coronavirus on Wednesday.

The Chinese government has been providing daily updates on the number of cases in a bid to head off public panic, with officials linking the outbreak to Wuhan’s seafood market.

It has also stepped up efforts to control the outbreak by tightening containment measures in hospitals, and discouraging public gatherings in Hubei province.

People across the country are being urged to avoid densely populated areas in general, the health commission said.

China has also stepped up its co-operation with the WHO, which is holding an emergency meeting to determine whether the outbreak of the new coronavirus constitutes a global health emergency.

The Chinese Communist Party’s central political and legal commission said in a post on its WeChat social media account that officials found to have covered up infections would be a “sinner for eternity before the party and the people”.

Fears of a pandemic similar to the severe acute respiratory syndrome (SARS) outbreak that started in China and killed nearly 800 people between 2002 and 2003 have rocked global markets, with aviation and luxury goods stocks hit particularly hard and the Chinese yuan tumbling.

Adam Kamradt-Scott, an infectious diseases expert at the centre for international security studies at the University of Sydney, said China has “come a long way” since the SARS outbreak.

He said: “I’m not sure that we could expect more of them at this stage in the outbreak, particularly when they are understandably focused on responding to the outbreak and trying to contain it ahead of the Chinese lunar new year celebrations.”

Companies across China – including Huawei and Apple-supplier Foxconn – are handing out masks and warning staff to avoid travelling to Wuhan.

Travel booking platforms such as Trip.com have said users can cancel travel plans to Wuhan for free, while Shanghai’s Disneyland said it will waive rescheduling fees for entry and hotel bookings within six months of the purchase date.

Hong Kong’s Cathay Pacific Airways Ltd, one of the airlines most affected by the SARS outbreak, said it will allow passengers to change or cancel flights to Wuhan without charge through to 15 February.

It said it would also allow flight attendants to wear a surgical mask while operating mainland China flights due to concerns over the new virus.

Taiwan joined Australia in warning citizens to avoid travel to Wuhan, while North Korea has banned foreign tourists to guard against the spread of the virus.

Singapore is among the countries that have started screening all passengers arriving on flights from China.