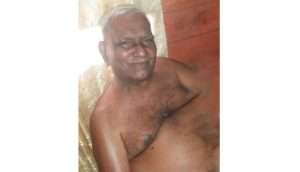 (NEWS ROOM GUYANA) – A 72-year-old pensioner who was badly beaten with a mop stick in the wee hours of Sunday at his Pump Road, Strathspey, East Coast Demerara home succumbed to his injuries just after midnight Monday at the Georgetown Public Hospital.

He was sleeping with his wife, Farida Ramsahoye in the upper flat of the house when they were awakened to four men hurling objects at the house and breaking windows at about 02:45hrs Sunday.

One of the couple’s sons, 27-year-old Gavin Ramsahoye, along with his wife Taijwattie Bhawanie and their one-year-old baby were also home at the time of the incident. They reside in the bottom flat of the house.

The News Room understands that one of the pensioner’s four sons, Rajwant Ramsahoye allegedly stole a gold chain from one of the suspects and they came to retrieve it.

The family said that they have not heard or seen Rajwant since he left home on January 15, 2020.

One of the suspects at the center of the murder is one of the pensioner’s sons, Navin Ramsahoye.

When the News Room visited the family on Tuesday, they were making arrangements for the pensioner’s funeral while still reeling from his death.

The man’s wife told the News Room that the suspects broke the gate and entered the yard after which they broke windows.

Mrs Ramsahoye said she placed an iron bar at the door to prevent them from entering.

“My son [one of the suspects] climb on the shed and come in the house, the door was locked, the door only have one bolt and I put on an iron bar, just so let them don’t get entry,” Mrs Ramsahoye said.

She said the suspects began to kick the door but her son subsequently gained entry through a broken window after which he opened the door for the three other suspects.

Mrs Ramsahoye said she begged them not to hurt her husband, but they turned on her and held a gun to her head.

By this time, Gavin, his wife and the baby fled the house and hid in some nearby bushes.

“I beg them and say y’all don’t beat he cause he ain’t well, they put a gun to my head and tell me if I don’t talk and say where my son [Rajwant] is, they will shoot me and kill me,” Mrs Ramsahoye said.

The pensioner suffered a stroke to the right side of his body about seven years ago and could not move without support.

The suspects brutally beat the pensioner with a mop stick as he lay helpless.

“He head burst, under his chin get a hole, he whole skin is lashes, I beg I beg…them damage everything in my house, my cabinet wares, my groceries and throw kerosene on everything,” the grieving woman said.

Meanwhile, after the suspects fled, the son who helped them returned to the house and fell asleep on the dam.

“That is where his brother catch he and my neighbour son, they tie he up and the police come for he,” Mrs Ramsahoye said.

Mrs Ramsahoye further explained that the son who allegedly stole the gold chain was badly beaten by the four suspects on Tuesday last and is now in hiding.

“Them carry he at the back by the school area, they beat he and say they gonna shoot he, but he getaway…then Wednesday he come out the house and me ain’t see he back yet,” Mrs Ramsahoye said.

Navin remains in custody with the three other suspects. Police said they are assisting with the investigation.

The pensioner lived in the community for over 20 years with his family and also worked as Police Constable at the La Bonne Intention sugar estate.

He was described as a jovial and peaceful person.