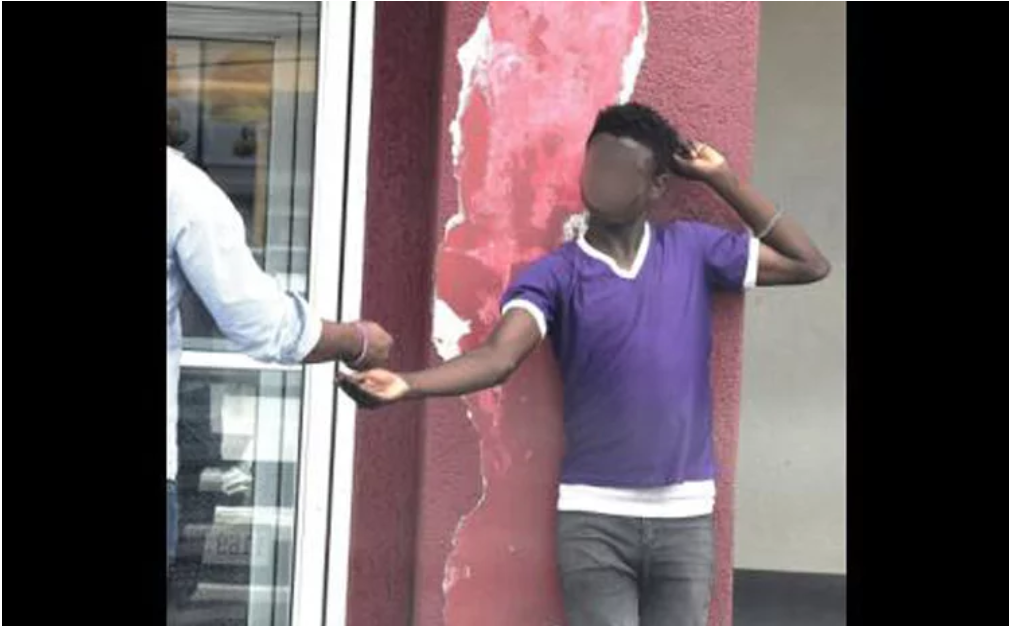 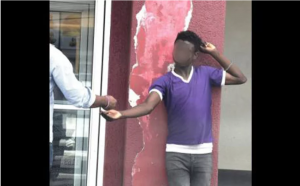 (JAMAICA GLEANER) – They mostly come out in the afternoons, about five o’clock for those who bother to go home and change from their school uniforms – children as young as six years old with outstretched palms and chilling tales of misfortune.

They gather at stoplights, ATM machines and supermarkets islandwide – sometimes alone and sometimes with their parents close by. They hope listeners will favour their pleas and spare some change. Many often do.

“Me mother don’t have it to send me and me likkle sister to school. So I come out here and anything me beg me use buy ‘Tiki’ to sell so me can buy food and give her lunch money,” explained ‘Troy’, a 17-year-old student of Bustamante High School in Clarendon.

Troy should be in the 11th grade preparing for his final exams, but at 11:30 last Thursday morning he was at the entrance to a KFC restaurant in Bargain Village, May Pen, begging for money from almost anyone who came through the door.

He has not attended Bustamante High since last September, and said his mother can barely afford his transportation to school from Bucknor – a tough community located miles away in the parish.

Such children are the focus of a ‘street-children’ survey that is to be revealed by the Child Protection and Family Services Agency (CPFSA) in coming months.

The CPFSA said the study was commissioned last year and was aimed at “determining the factors which predispose children to be living and working on the streets”.

“[It is also aimed at] identifying gaps in the provision of care and social-protection services that impede an effective response to addressing street children,” read a statement from the agency, adding that the study is in its final stages.

The survey findings were outlined by the CPFSA following queries from The Sunday Gleaner into child-begging in the Corporate Area, St Catherine, Clarendon and St Mary.

The CPFSA, however, could not say whether its investigations or latest probes revealed that any child was kidnapped, injured or killed while working or begging on the streets, an alarm repeatedly sounded by child-rights advocates last week.

A 2016 study by the Statistical Institute of Jamaica (STATIN) and the Ministry of Labour and Social Security revealed that there was an estimated 36,000 cases of child-labour cases islandwide.

Child-begging, particularly forced-begging, where children are directed by parents to beg on the streets, is believed to make up a large percentage of those numbers, theorised Sasha Deer-Gordon, head of the Child Labour Unit in the ministry, during a recent Sunday Gleaner interview.

The CPFSA said 1,297 cases of child-labour cases were reported to the National Children’s Registry from 2015-2017, which advocates said is a gross under-representation of the numbers.

In the past two weeks, The Sunday Gleaner observed young children begging at stoplights in and around Half-Way Tree, St Andrew; in the Coronation Market in downtown Kingston; under the toll road overpass at the intersection of Hagley Park Road and Marcus Garvey Drive in Kingston, inside the Portmore Mall and at the Spanish Town bus park, St Catherine.

They seemed to favour ATM machines, KFC restaurants, and commercial locations such as the newly opened Fontana Pharmacy on East King’s House Road, where security guards say each evening they endure a game of ‘cat and mouse’ with a group of beggars, no more than 12 years old, who sometimes give customers a hard time on the premises.

At a KFC drive-through in Cross Roads, one female beggar knocked on car door to car door shortly after 6 p.m. on Wednesday, begging for money to purchase food.

Behind her, a young girl, who appeared to be no older than seven years old trailed, and stopped whenever her guardian leaned towards each car window.

Educators last week said such early grooming by parents normalises childhood begging, while police believe it is a gateway to windshield wiping and makes children early targets for gang-recruitment in Jamaica’s toughest enclaves.

“I think there is a culture of begging,” said Juliet Campbell-McPherson, principal of St Michael’s Primary School, located in the gritty ‘Southside’ community in central Kingston.

“In the inner city, some persons, instead of trying to get jobs, prefer to ‘hustle’ (beg) to cook some food, and they do it around the children who then see it as a normal thing,” she argued, adding that if more parents arrange transportation for their children, it provides less time for them to be begging.

Other sentiments were echoed by Principal Alfred Thomas of Brown’s Town High School in St Ann, who said he too has had to intervene in cases where students were reportedly begging on the streets.

Meanwhile, Assistant Commissioner of Police Devon Watkiss, who oversees Area Four, which encompasses much of the Corporate Area and Kingston East, said the police and stakeholders continue to work towards removing child beggars and windshield wipers from the streets.

“… We have these youths who we wish not to have as persons who we have to put through the flow of the (criminal) system, but rather as a collective of persons to be modified and channelled towards good individual development. So that’s where we are going with it,” he explained, noting that the police has been partnering with government and non-government entities in an effort to find workable solutions.