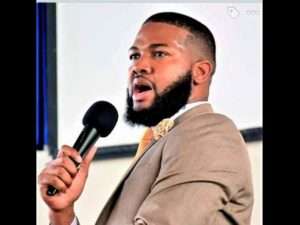 (JAMAICA STAR) – Pastor Jeremy Arnold said he was thrown into a garbage bin at birth by doctors who thought he was dead.

Arnold, 30, pastor of Andrews Seventh-day Adventist Church in Kingston, said that his mother, Barbara Robinson, went into preterm labour and had him at five months, some four months before he was due to be born.

He said that the doctors in Belize City, Belize, where he was born in 1989, thought he was dead and threw him into the garbage bin.

“My mom was sent home from the hospital and she returned to the garbage can where she found her foetus, and she took a rag from her pocket and she picked up her baby, put it in the rag, put it in her pocket and went home,” Arnold said.

But having been taken home, Arnold again had a close brush with death.

“She took the dress that she had on and put it in a tub of water and went to attend to her children and somebody asked, ‘Mommy, what about the baby?’ Then she remembered that the baby is in the rag, but the rag is in the pocket of the dress, and the dress is in the tub of water. She ran outside, searched among the tub of clothes, and she found her baby, still alive,” Arnold said.

He told THE STAR that he chose to share his story hoping that people will be inspired and believe in the power of God.

He said that he got sick eight days after he was born. His mother took him to the hospital, where they discovered that his blood was poisoned and he needed a transfusion.

Arnold said his mother told him about his miraculous survival and his tumultuous journey when he was six years old. By that time he should have died, based on what his mother claimed doctors told her. Arnold told THE STAR that he has “serious health issues with my organs” due to his premature birth.

“From time to time my organs will shut down. In 2016 my lungs shut down … I have had eye problems, my kidneys have been infected, but if I don’t tell people these things, they will not know,” he said.

Now residing in Kingston, Arnold said that he is a living proof that God is a miracle-working God. He said, also, that being here has been a blessing and he will use it as an opportunity to find family members.

“People have sought to challenge my story but this was the story that was told to me by my mother and other community members. This a story that has given me hope and strength throughout the years and I just want to share that hope,” Arnold said.

The Belizean studied theology at the Northern Caribbean University in Mandeville, Manchester, and graduated in 2018. In addition to sharing his story and seeking souls for God’s kingdom, Arnold is on a quest to connect with his Jamaican roots.

“I will definitely do some research to find my Jamaican family. I heard that my great-grandmother was a Jamaican, so I want to see if I can find anyone,” he said.