Apple May Have To Abandon Lightning Connector Cable 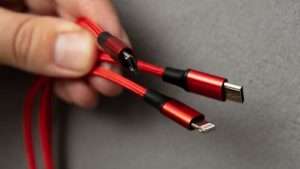 bbc.com- Apple could be forced to abandon its Lightning connector cable if European lawmakers get their way.

The cable is used to charge and sync many Apple devices, such as the iPhone.

But members of the European Parliament urged the European Commission on Monday to force tech giants to adopt a single universal charging method.

Two other charging cables – USB-C and micro-USB – are used on Android devices, and Apple has already stopped using Lightning on the 2018 iPad Pro.

European regulators will vote on the matter on a yet to be determined date, but Apple says the proposed regulation would stifle innovation and be disruptive to consumers.

How likely is this to happen?

If the regulator enforces its proposed regulation, Apple devices sold in Europe would be required to have a new charging method.

It is likely Apple would then adopt USB-C, considering the company’s 2018 iPad Pro ditched Lightning in favour of the technology.

Another possible option would be to remove charging ports and cables entirely and use wireless charging instead.

A new cable would mark the tech giant’s third in 13 years.

Why does the EU want this change?

The European Commission has been campaigning for a single charging method for the past decade.

There were more than 30 types of charger on the market in 2009, but that number has since been reduced to just three.

The regulator is determined to cut down on electronic waste being created by obsolete cables, which it estimates generate more than 51,000 tonnes of waste per year.

“A common charger should fit all mobile phones, tablets, e-book readers and other portable devices.”

Hasn’t this happened before?

Apple, along with 10 other leading tech giants such as Nokia and Samsung, signed a memorandum of understanding in 2009.

They pledged to provide micro-USB compatible chargers for consumers.

However, Apple took advantage of a loophole that allowed manufacturers to continue using their own chargers if they offered an adaptor.

Then, in 2014, the EU passed the Radio Equipment Directive, which called for a “renewed effort to develop a common charger”.

Apple insisted that its slimmer devices would be unable to fit the then-new USB-C technology, and it claimed it would cost up to $2bn (£1.53bn) to meet the desired standard.

Apple and many of its rivals, such as Huawei and Samsung, have already released products that charge their devices wirelessly.

Although the technology is in its infancy, new developments have meant that it is now able to compete with traditional charging methods.

Some analysts are even predicting that Apple could scrap its charging ports altogether by releasing future iPhone and iPad models that rely solely on wireless charging.