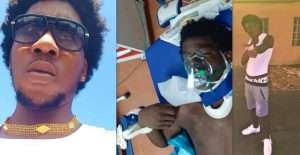 trinidadexpress.com- One of the men involved in the abduction of medical doctor Dr Rudradeva Sharma has died at hospital.

Akeem Marine had been warded in critical condition at the San Fernando General Hospital.

Marine is of Lady Hailes Avenue, San Fernando – near where Sharma and his colleague Dr Prem Vijay Naidoo were hijacked around midnight Tuesday.

Marine was flagged on the TTPS criminal records as a firearm offender, a senior police officer of the Southern Police Division said.

Marine and two other suspects were taken to hospital and kept under police guard at SFGH in connection with the abduction of Sharma and Naidoo.

Naidoo, 39, told police that he and Sharma, 38, were at Rushworth Street Extension – a deadend street – where they were held up at gunpoint and abducted.

They were snatched by three men who robbed and forced them into the trunk of Sharma’s Honda CRV.

The doctors were being taken north along the highway when the vehicle crashed and overturned at least ten times.

His colleague and the three suspects were injured.

Naidoo was discharged from hospital hours after the crash.

Another suspect was also discharged and taken into custody of the San Fernando CID.

He is expected to be interrogated by detectives on Thursday.

Marine had been warded in critical condition for injuries he sustained in the crash.