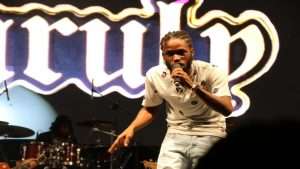 (JAMAICA STAR) – Fast-rising dancehall artiste, Quada is now in a police lock-up charged with murder and arson in relation to the 2019 mob killing of Miguel Williams.

Williams is the man whom, it is alleged, was involved in the rape and slaying of eight-year-old Shantae Skyers whose decomposing was found in a section of the Sterling Castle Heights community in April last year.

She had been missing for several days after she did not return home from school.

According to the constabulary’s Corporate Communications Unit (CCU), Quada, whose birth name is Shaquelle Clarke, was charged after a question and answer session with the Constant Spring Police.

The CCU also revealed that the entertainer, accompanied by his lawyer, turned in himself yesterday.

Quada who is best known on the entertainment circuit for his singles More Money More Life, New Gyal Alert and Hail.

He is the second person to be arrested and charged in relation to Williams’ murder.

The STAR understands that a court date has not yet been set for the entertainer.

Efforts to get a comment from a member of his team were not successful.