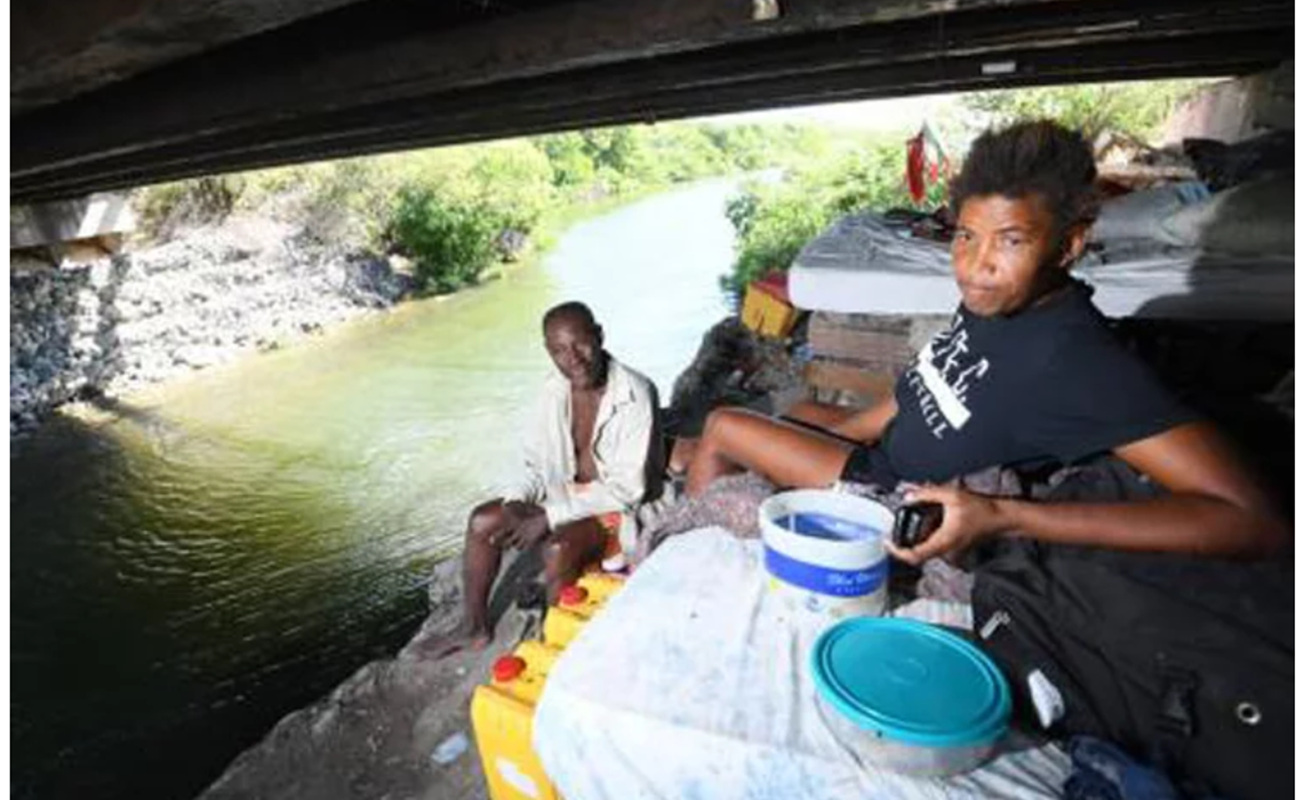 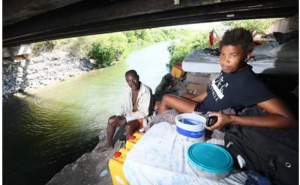 Bringle reluctantly struts down the steep hill to his abiding place, not taking his eyes off the news team.

Lewis then returns to the comfort of her bed, as dozens of vehicles travel across her ‘roof top’.

Believe it or not, the 38-year-old woman has been sharing living space with three other persons under the Edgewater Bridge in Portmore, St Catherine, for almost a decade.

When THE STAR team visited yesterday, the two other women were not present but the man of the ‘house’, Paul Grant, along with one of their friends Edward Forbes were enjoying some ‘Sunday Monday’ (leftovers from Sunday dinner before) for breakfast.

“A Westmoreland mi originally from but mi parents dead from mi a baby. Mi auntie grow mi, but she is a big woman now. She know say is here so mi live under the bridge but she say where mi did live a Westmoreland, mi never did a get any good feeding so I must stay here so,” she said.

With two beds, a chest of drawers and a few clothes baskets occupying their small space, Lewis and her companions live just steps away from a deep waterway that leads to the sea.

The water holds different species of fish but also contains several crocodiles. But Lewis said she is unbothered by the predators.

She explained that Grant had been living under the bridge for 18 years, and invited her and the other women to join him to protect them.

“Him really start take care a mi more after him find out say mi trouble with fits (epilepsy). It used to lick mi down one time but Paul always make sure mi go clinic and take care a myself,” he said.

She added that Paul has been more than a friend to her and the other women, stating that he also provides for their ‘sexual needs’.

She told THE STAR that while she is appreciative of having somewhere to lay her bed, she longs for better days and hopes that she and her friends will receive assistance to build a home.

“Mi really feel at home here so, because other than the tief, nothing nuh really bother we. At nights when the mosquito dem start come out, we light fire and bush and run dem way but sometimes the place gets really cold. Of course, mi would wah live somewhere better and start a family but mi appreciate where mi at now,” she said.

Lewis also had high praises for Forbes, who, while overseeing the interview, said he spends most of his free time with the four in order to ensure that they are safe.

“Sometimes mi bleach all night so dem can sleep because if all a we sleep, people come rob them. Sometimes dem go do landscaping work and as dem put down the money and go sleep, people come take it away. Mi even give them pots and people tief it,” he said. He blushed as he admitted he loves one of the women.

If mi call her 10 times, she will answer but she always a say mi a stress her out. Nuff time mi send her credit and she nuh call mi back but mi love her same way because she is a nice girl,” he said flashing a bright smile.

A fisherman by profession, Forbes said he looks forward to the day when his friends get a more secure home but promises that he would continue to stick by them as long as he could.

“I spend every chance I get with them. Even during Christmas, this is where I took the dinner I prepare. Sorrel and everything … dem a mi fren and mi love dem,” said Forbes.