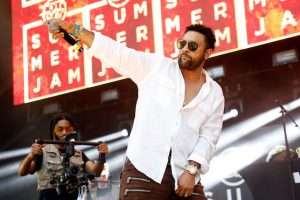 Shaggy seemed to be the perfect fit for the project, especially since RiRi has been working with a number of popular Jamaican artists for the alleged dancehall-inspired reggae album. In a new interview with the Daily Star, Shaggy revealed that he passed on the chance because he didn’t want to audition for the feature, saying, “They approached me for the Rihanna project, yeah. There’s a lot of great people involved, but for me, I didn’t need to audition to be on the record. I’ll leave that to younger guys. But from what I hear, it should be good.” It looks like that despite passing on the opportunity, there aren’t any ill feelings between Shaggy and Rihanna.

Shaggy added that the singer’s shift into dancehall will be helpful for the genre: “It’s healthy competition. Dancehall is in good place but we need as many people to do this art form as possible. When it crosses over and becomes popular with artists from other genres and other cultures, that can only be good.”

Rihanna has been teasing R9 for quite some time, with the latest incident arriving in the form of a cryptic Instagram video right before Christmas.