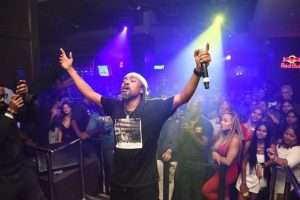 This year will be the final season of the Carnival showcase, after 10 years.

The soca superstar made the announcement at the Black 2 Blue fete held at the Brian Lara Stadium in Tarouba on Saturday.

The 45 year old singer has delivered Machel Monday since 2011.

Montano paused during his set to reflect on his journey in music.

Montano, who has dominated Carnival seasons past and present, has maintained his status as the King of Soca. With the Carnival season in full swing, Montano has released several bumper soca tunes, which has seen heavy rotation on the airwaves, among them, ‘Stink Behaviour’, ‘Brace’, ‘Play Harder’ and ‘Super Soca’.

Montano, who has also dubbed himself, ‘The Monk’ has brought several international acts to Machel Monday over the past nine years. Some of these include: French Montano, Angela Hunte, Ashanti, Beenie Man, Pitbull and Bounty Killa to name a few.

Machel Monday 10, the finale will take place on February 17 at the Hasely Crawford Stadium.