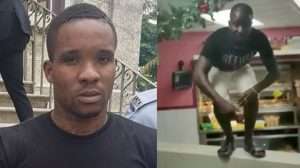 The young artiste who spent a week in prison on remand for jumping on the counter of fast food outlet Chefette and singing a song, was given his freedom when he reappeared in the District ‘A’ Magistrates’ Court today.

Today, Magistrate Douglas Frederick placed St Pierre on a bond to keep the peace for six months, with an alternative of three months in prison if he is found in breach.

Before he was released, St Pierre, who was represented by Queen’s Counsel Michael Lashley, issued a brief but sincere public apology to Chefette Restaurants.

“I apologize Sir to the company of Chefette and I will never do it again,” he told the court as Chefette’s security manager Shawn Thornhill looked on.

The magistrate told St Pierre he took the necessary action because his actions were highly inappropriate.

“I thought your actions were inappropriate and I needed to send a strong message to persons who may think that pranks are acceptable, especially in business places that will cause people to have health concerns,” he explained.

“I know you watch social media and you see where people do some very dangerous pranks but this is not the place for that.”