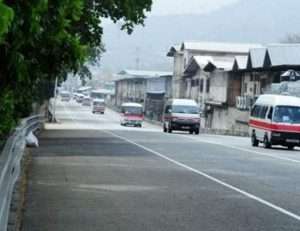 (TRINIDAD EXPRESS) – TWO children remained patients at the Mt Hope Hospital after they were struck by a vehicle along the Priority Bus Route (PBR) on Wednesday.

It happened at about 3.45 p.m. on Wednesday along the PBR near Arima.

The children had just exited a maxi taxi and were attempting to cross the road when they were struck by a Toyota Corolla.

Police and paramedics were notified and the injured children were taken to hospital.

The driver was questioned by police and it was found that he did not have a PBR pass.

He is assisting officers with enquiries into dangerous driving and unauthorised use of the bus route.

Road Safety Coordinator for the T&T Police Service, PC Brent Batson reminded citizens yesterday that they should not “take chances” and use the PBR unless authorised to.

“The incident on the PBR injuring innocent schoolchildren who were attempting to cross the roadway with assistance of maxi drivers when they were hit by an unauthorised driver highlights the lawless, selfish behaviour of some drivers which negatively impact other innocent road users. The reason the roadway has limited use is because it’s a mass transit route and pedestrians are always crossing at various points. This is also why the speed limit is lower than other major roadways. So please be mindful of these things and, unless you have authorisation to, don’t use the bus route,” Batson said.