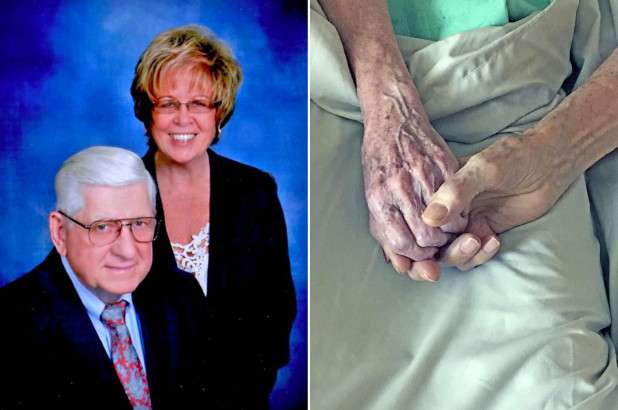 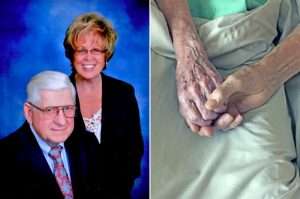 (NEW YORK POST) – An Ohio couple proved “till death do us part” wasn’t hyperbole after they died while holding hands on Christmas Eve. Bill and Nancy Schafrath passed away peacefully within hours of each other, putting a bow on a loving marriage that had lasted for 64 years.

When Bill couldn’t get out of bed anymore over their last few weeks, the couple’s niece, Pat Cornelius, pushed their beds together, reports the Daily Record. As a result, “they literally held hands for the last week of their life,” she says.

“Certainly for me, this is a first, a Mass where we are burying a married couple together, who died on the same day,” said Fr. Richard Samide during their funeral service Thursday at St. Mary of the Immaculate Conception church.

Samide added that, while the Schafraths didn’t have children together, the soulmates bonded over their large families and extensive volunteer work. Nancy, a “bubbly and energetic” bank employee for 35 years, worked for the domestic violence non-profit Every Woman’s House, and Quota Club, an organization dedicated to helping the hearing-impaired, among many others.

Nephew John Moritz described his Aunt Nancy as a “fun-loving lady who everybody liked and liked to be around.”

Her other half, Bill, was a bricklayer and Korean War veteran “who loved to cook,” says Cornelius. The “meticulous” former US Army chef even “grew his own tomatoes” at the couple’s home on the west side of Wooster, their hometown news outlet reports.

When not working or volunteering for a charity, Bill and Nancy enjoyed playing cards together and wintering in Tampa Bay, Fla.

As they approached their twilight years, the pensioner paramours increasingly wanted to spend every minute together, according to Cornelius, who was their caregiver towards the end. “I’d have to take Bill to the dentist, Nancy wanted to go,” she says. “So there was always three of us in the room.”

It was only fitting that the loving couple would be inseparable even in death.

“It’s almost like they decided that if one went, the other would go, too,” Moritz said. “Somehow they knew.”

Bill and Nancy aren’t the first spouses to pass away virtually moments apart. Last February, an upstate New York couple died within hours of each other after 70 years of marriage.