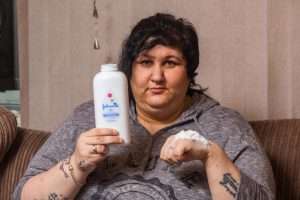 A UK woman is addicted to powder — and not the illicit kind. Lisa Anderson, of Paignton, Devon, consumes a nearly half-pound bottle of talcum every day — a bizarre habit she claims has set her back more than $10,000.

The 44-year-old mother of five first developed a taste for Johnson & Johnson’s baby powder in 2004 while drying her son off after a bath, she tells South West News Service. Upon noticing “a bit of dust that had come off the bottle, I had this sudden urge to eat it, and I just couldn’t fight it,” says Anderson, who licked some off her hand.

It was love at first bite.

“It really hit the spot,” Anderson says, adding that she enjoys “the nice soapy taste.”

Her peculiar craving soon blossomed into a full-blown addiction that found her scarfing the powder off her hand every 30 minutes up to 40 times a day. Anderson estimates she’s spent almost $10,500 on her talc dependency, although she did manage to stay off the white stuff for two days once — which she calls “the worst time of my life.”

Her talc habit’s gotten so bad that she munches on mints while out of the house to replicate its chalky texture. However, intervention finally came when her ex-partner caught her in the act after she’d managed to keep her powder proclivity a secret for a decade.

Anderson finally saw a doctor, who suspected she had Pica syndrome, a disorder characterized by eating nutrient-devoid items such as hair, dirt or paint chips, according to the National Eating Disorder Association. Anderson also purportedly suffers from OCD and even an iron deficiency.

“I spent years not knowing what was going on or happening — but it turns out it is a condition,” says Anderson, who has been referred to a counselor. She added that she “just wants to let others know they are not alone.”

If not curtailed, Anderson’s offbeat eating habit could pose a serious health risk, the US National Library of Medicine reports. Talcum powder contains minerals such as magnesium and silicon, and ingesting it could cause poisoning, diarrhea and even lung failure and convulsions.

In March 2019, Johnson & Johnson was ordered to pay $29 million dollars to a California woman who claimed its baby powder gave her terminal cancer. Two months later, a Brooklyn woman was awarded $325 million after allegedly getting cancer from asbestos-laced J&J powder.

Nonetheless, the pharmaceutical giant maintained in December that the product is perfectly safe and asbestos-free, blaming the FDA for the public-health scare.