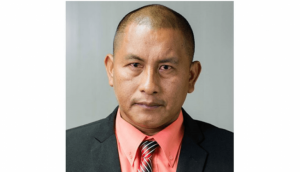 (NEWS ROOM GUYANA) — Top People’s Progressive Party (PPP) representative in Lethem, Allister Charlie was on Tuesday charged with sexual assault of a 16-year-old boy and for also attempting to prevent the course of justice.

Charlie, who served as a Member of Parliament for the PPP appeared before City Magistrate Sherdel Isaacs-Marcus for sexually assaulting the teenager between July 31 and August 1, 2019, at Lethem, Central Rupununi.

He was represented by attorney-at-law Latchmie Rahamat, who made an application for bail.

The Magistrate released Charlie on bail in the sum of $200,000. The matter was transferred to the Lethem Magistrate’s Court for January 31, 2020.

Last August, the Guyana Police Force had launched an investigation against Charlie into the alleged sexual assault of the teenager.

The incident came to the forefront by the victim’s mother who saw a video of the incident and subsequently made a post on Facebook saying: “I’m disturbed by the video that I saw this morning of my son being taken advantage.”

According to reports, the victim was attending a party at Charlie’s home at Lethem when he was lured to a bar by him.

Charlie reportedly gave the teen a drink laced with ecstasy and took a video of the teen with his pants down and genitals exposed, with Charlie touching the teen’s genitals also. At the time of the indictment several persons were in the bar and were laughing at Charlie’s action.

A person who was at the bar saw the ordeal and recorded the video on his phone. The video was then handed over to the victim’s mother.

The matter was reported to the police; Police claimed Charlie attempted to pervert the course of justice to have the charges dropped.