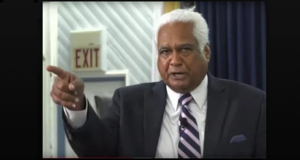 (TRINIDAD NEWSDAY) — Investigators of the police Financial Intelligence Branch have been given permission to retain an additional $2.6 million they seized from the Third Exodus Assembly Church in Longdenville.

Sources said senior magistrate Rajendra Rambachan, sitting in Chaguanas, granted the application to the police, who also received a similar order to seize the millions from Pastor Vinworth Dayal when he tried to exchange $28,046,500 in old $100 cotton notes for new polymer bills, at the Central Bank, on December 31.

Last week, police raided properties belonging to Dayal, and on Thursday, they found more cash at the church at Depot Road, Longdenville.

The additional cash was found in envelopes containing bills in other denominations. Dayal has told police that the money were tithes.

The detention orders sought by the police were made under the Proceeds of Crime Act, which allows them to hold the cash for a period not exceeding three months from the date of the order. According to the act, a magistrate, if satisfied, may from time to time authorise the further detention of the cash, with the total period of detention not exceeding two years.

The law also allows the person from whom the money was seized to apply to the court for the money to be released.

Charges have not been laid against Dayal, who on Friday, in a sermon, said the devil was trying to “make him famous.”

Just before the Central Bank closed on Old Year’s Day, Dayal went to the bank with 29 boxes filled with the cotton notes.

The public had been told to change their old $100 bills for the new polymer banknotes by the last day of 2019.

Weeks earlier, in announcing the change-over, National Security Minister Stuart Young said the measure was to “fight money laundering, including the financing of drugs, narcotics and illegal firearms, tax evasion and the black money economy, counterfeiting and other illegal operations.