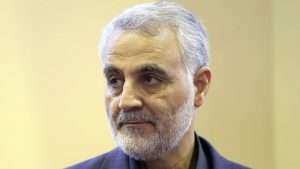 (SKY NEWS) – Donald Trump has defended the assassination of a top Iranian general by US forces – tweeting that “he should have been taken out many years ago”.

Major General Qassem Soleimani was killed in a drone airstrike on Baghdad airport – an attack that marks a dramatic escalation of tensions with Tehran.

Iran immediately threatened a “crushing revenge” for the assassination in Iraq of Major General Qassem Soleimani, the head of Iran’s elite Quds Force and spearhead of Iran’s spreading military influence in the Middle East.

On Friday – about 12 hours after news of the attack emerged – Mr Trump wrote: “General Qassem Soleimani has killed or badly wounded thousands of Americans over an extended period of time, and was plotting to kill many more… but got caught!

“He was directly and indirectly responsible for the death of millions of people, including the recent large number of PROTESTERS killed in Iran itself. While Iran will never be able to properly admit it, Soleimani was both hated and feared within the country. They are not nearly as saddened as the leaders will let the outside world believe. He should have been taken out many years ago!”

The Pentagon confirmed US forces had killed the general, a revered figure in the region, on Friday.

It said Maj Gen Soleimani, 62, had “orchestrated” attacks on coalition bases in Iraq over the past few months and approved the “attacks” on the US embassy in Baghdad earlier this week.

“This strike was aimed at deterring future Iranian attack plans,” the Pentagon said in a statement, adding that the US would continue to take necessary action to protect Americans and interests around the world.

The US embassy in Baghdad has urged American citizens to depart Iraq immediately “via airline while possible, and failing that, to other countries via land”.

The country’s defence minister, Amir Hatami, said: “A crushing revenge will be taken for Soleimani’s unjust assassination… We will take revenge from all those involved and responsible.”

Iran’s supreme leader Ayatollah Ali Khamenei warned a “harsh retaliation is waiting” for the US – describing the commander as the “international face of resistance”.

Declaring three days of public mourning during a statement on state television, Khamenei added: “All enemies should know that the jihad of resistance will continue with a doubled motivation, and a definite victory awaits the fighters in the holy war.”

Iranian President Hassan Rouhani said there was no doubt that Iran and “other freedom-seeking countries” in the region will take revenge.

He added: “Soleimani’s martyrdom will make Iran more decisive to resist America’s expansionism and to defend our Islamic values.

And Iranian foreign minister Mohammad Javad Zarif said in a post on Twitter: “The US act of international terrorism, targeting & assassinating General Soleimani… is extremely dangerous & a foolish escalation. The US bears responsibility for all consequences of its rogue adventurism.”

The Pentagon said the strike was carried out “at the direction” of President Donald Trump, who tweeted an image of the American flag several hours after the attack.

Friday’s airstrike was conducted by a drone, and according to a US official, Maj Gen Soleimani’s vehicle was struck on an access road near the airport.

A senior Iraqi security official said the strike took place near the cargo area after Maj Gen Soleimani left his plane to be greeted by Mr al Muhandis. The plane had arrived from either Lebanon or Syria.

An Iranian politician said Maj Gen Soleimani’s body was identified by the ring he wore. An official from the PMF said they did not find the body of Mr al Muhandis.

It is unclear what legal authority the US relied on to carry out the attack. American presidents claim broad authority to act without congressional approval when US personnel or interests are facing an imminent threat.

Sources have told Sky’s defence and security correspondent Alistair Bunkall that the UK military have increased their security and readiness at bases in the Middle East region following the attack.

Foreign Secretary Dominic Raab said: “We have always recognised the aggressive threat posed by the Iranian Quds force led by Qasem Soleimani. Following his death, we urge all parties to de-escalate. Further conflict is in none of our interests.”

Mr Raab has had a conversation with his US counterpart Mike Pompeo, who tweeted: “Thankful that our allies recognise the continuing aggressive threats posed by the Iranian Quds Force. The U.S. remains committed to de-escalation.”

The rising tension between the US and Iran pushed the cost of Brent crude oil to $68 per barrel – a rise of 3%.

The airstrike followed a New Year’s Eve attack by Iran-backed militias on the US Embassy in Baghdad.

The two-day embassy attack, which ended on Wednesday, prompted Mr Trump to order the deployment of about 750 US soldiers to the Middle East.

The breach at the embassy followed US airstrikes on Sunday that killed 25 fighters of the Iran-backed militia in Iraq, the Kataeb Hezbollah.

The US military said the Sunday strikes were in retaliation for last week’s killing of an American contractor in a rocket attack on an Iraqi military base that the US blamed on the militia.

Maj Gen Soleimani, who led the foreign arm of the Revolutionary Guards and had a key role in fighting in Syria and Iraq, acquired celebrity status at home and abroad.

He was instrumental in the spread of Iranian influence in the Middle East, which the US and Tehran’s regional foes Saudi Arabia and Israel have struggled to keep in check.

As head of the Quds Force, he frequently shuttled between Iraq, Lebanon and Syria.

He had survived several assassination attempts against him by Western, Israeli and Arab agencies over the past two decades.

His Quds Force, tasked with carrying out operations beyond Iran’s borders, shored up support for Syrian President Bashar al Assad when he looked close to defeat in the civil war and also helped militias defeat Islamic State in Iraq.

Sky News foreign affairs editor Deborah Haynes said: “It’s hard to overstate the importance of Qassem Soleimani. He is someone who has been instrumental to Iranian foreign policy since the 2003 invasion of Iraq by the US and its allies.

“The taking out of this figure is a hugely bold move by the US.

“Iran will feel compelled to retaliate. They cannot let an act like this go without an answer. America will have taken that into consideration when it decided to take this move.

“President Trump said Iran would pay ‘a big price’ for the storming of the US embassy in Baghdad a couple of days ago. I don’t think anyone would have imagined it would be such a big price – probably even the Iranians.”