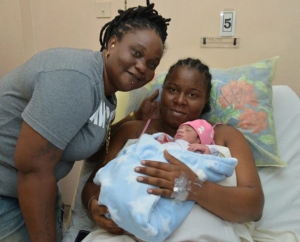 Their daughter may be as close to a miracle as the gay couple can ever expect.

Using sperm donated by a gay friend, who prefers to remain anonymous, the couple said they performed an at-home insemination on May 14.

A week later, after six pregnancy tests and a doctor’s visit, it was confirmed that St Louis was pregnant.

Baby Miracle was born at 6.03 a.m. yesterday, the fourth baby to be delivered at the Mt Hope Women’s Hospital on New Year’s Day.

An ecstatic Melville shared their story with the Express yesterday afternoon.

“During that time, she kept saying she wanted a baby. I have a daughter who is 21. We have a good friend who we asked to help and he said he had no problem doing it. We came home, he gave us his sperm and I inserted it into her,” she said.

Melville said prior to the insemination, she and St Louis researched the procedure on YouTube.

She said their friend/donor also got tested to ensure that he was disease-free.

“We know him for years. Before we did it, he did blood tests to make sure he was not sick. They both had no sexual contact because he is with somebody else. But it is a good friend. I told him that we will like him to be around. He will be the godfather,” she said.

The at-home procedure was done on May 14.

“By the 17th we went on the beach. She was going to drink a Stag and I told her no, don’t drink it you’re pregnant. I just knew. And I told her that it was a baby girl and her name will be Miracle. She said how you know that? And I said God just told me you’re pregnant,” she said.

Seven days after the insemination, St Louis did her first pregnancy test and the result was positive.

Still in disbelief, she repeated the tests every morning for five days, with the same results.

A doctor’s visit eventually confirmed what they already knew.

“We can’t even explain the feeling. This is really a miracle because I know there are a lot of people paying thousands of dollars to have a baby,” Melville said.

“When she did the test by the doctor, (the doctor) said she was pregnant. I explained to the doctor what I did and she told me she was amazed by what I did and that I was brave,” she said. “I said I just wanted to make her happy. This was what she wanted.”

St Louis said she, too, was overjoyed, as Miracle is her first baby.

Asked how they felt about Miracle being born on January 1, Melville said she somehow expected it.

“I always feel that by giving her the name ‘Miracle’ I know something miraculous was going to happen. Because when she came in Sunday I told her that this is going to be a New Year’s baby.”

On why they chose this route instead of having the procedure done at a fertility clinic, Melville said: “People pay a lot of money to do this and it’s not always guaranteed it would work.”

Melville said she and St Louis have received tremendous support from family and friends.

“My mother came from the US and my sister came and surprised us. There is real support from family,” she said.

“I couldn’t have asked for anything more. My mom brought down everything baby needs.”

St Louis and baby Miracle are expected to be discharged today.

Gynaecologist and obstetrician Dr Sherene Kalloo said it was the first time she had heard of an at-home insemination locally.

“There are more gay couples who are coming with suggestions that they will like to have babies. However, the procedure for conception to take place requires a donor, which can be a male partner that they know, or they can go to the sperm bank, which we do have here. But this is the first time I’m hearing of somebody doing it themselves,” she told the Express in a phone interview.

“What is usually done is that you come to the doctor’s office and you do artificial insemination or intrauterine insemination. A sample is taken and placed directly into the uterine cavity. It is not unheard of that they can take the sample themselves, put it in a syringe and then put the syringe with the sperm into the vagina without anybody seeing, other than themselves,” she explained.

Kalloo added: “The outcome of having a pregnancy, doing it that way, would be pretty low but not impossible. So having successfully gotten through with the procedure they are describing, they’re very lucky.”

Asked if she would advise other lesbian couples to do the same, Kalloo responded:

“If it can be done without a doctor’s assistance, why not? You’re saving money. If it’s somebody that they know, the only advice I would give is that they get the donor to ensure that they are tested for HIV and to make sure they are not smoking.”

Baby miracle was the fourth baby to be born at the Mt Hope Women’s Hospital yesterday.