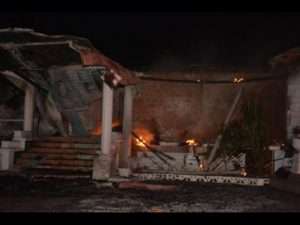 (JAMAICA GLEANER) — The family that operated the 214-year-old Richmond Hill Inn, which was ravaged by fire on Monday night, has said that rebuilding the historic Montego Bay landmark is out of the question.

The repurposed great house, owned and operated by Stefanie Chin and her two daughters, was burnt to ashes by fire of unknown origin, which began some time after 9:30 p.m.

The smoke from the blaze covered the city of Montego Bay for three hours as residents watched in bewilderment as flames consumed the history-rich facility, which has, in the last 20 years, become a popular venue for weddings and dinner parties.

“Seconds after it started, it was spreading throughout the building,” said the 13-year-old boy who saw it first.

He added that he alerted his mother, who called the operators and the fire brigade.

A German guest staying in one of the rooms separate from the great house area reportedly tried to use a hose hoping to battle the flames, but they were too much for him.

The building, which the owners said was not insured, was gutted before firefighters could douse the flames. Property such as artworks and furnishings – with the exception of the building – is valued at US$10 million (J$13.3 billion).

“There is no way we can rebuild what we had,” Grace Elmore told The Gleaner yesterday, her voice reflecting the pain and shock of the disaster.

Elmore’s family owns the 19 acres of land that adjoins the property, where the Inn is located, in addition to a number of guest rooms that were not affected by the blaze.

Several 15th- and 16th-century antique pieces; art by one of Jamaica’s most revered artists, the late Barrington Watson; and an original terracotta jar brought to Jamaica by a Spanish galleon during the 15th-century reign of Queen Isabella and King Ferdinand of Spain are among priceless pieces destroyed.

Photos of former United States President Jimmy Carter, who dined there during the days the late John Rollins would roll in with some of the biggest names in government; entertainers LL Cool J, Alicia Keys, Eddie Murphy; and Jamaican Prime Ministers Alexander Bustamante, Edward Seaga and Norman Manley were among images hanging on the molasses, horsehair and limestone walls of the great house.

Yesterday, Tourism Minister Edmund Bartlett expressed sympathy to the owners, describing the damage as a devastating setback for Chin and her family, who have owned the property for 60 years.

“This is a very difficult time. I know many of the items you lost are irreplaceable but remain hopeful that we will see Richmond Hill restored to its former glory,” he told the family.

Stefanie Chin, who came to Jamaica at the age of 30 from Austria, was quoted in a 2008 Gleaner article saying she bought the original plantation great house on the Richmond Hill Estate from the Darby family in 1960.

In the 1700s, the property was owned by the Dewars, members of the proud Scotts clan from which the famous whisky takes its name.

The cause of the fire, which did not spread to other buildings on the property, is still being investigated. No one was reported hurt in the incident.