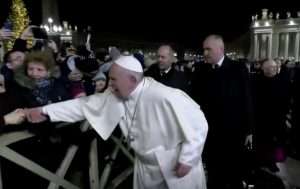 (NEW YORK POST) — Pope Francis said he was sorry Wednesday for slapping the arm of an overzealous pilgrim who unexpectedly grabbed his hand in St. Peter’s Square — calling his actions a “bad example.”

The pontiff, 83, made the impromptu apology during his first homily of the new year.

“So many times we lose patience, even me, and I apologize for yesterday’s bad example,” the pope told a crowd of thousands gathered at St. Peter’s Square Wednesday at the end of the traditional New Year Mass.

The sharp encounter, posted to Reuters’ Twitter account, shows the unidentified woman making the sign of the cross as the pontiff worked his way down a receiving line of pilgrims in Vatican City.

But as the pope began to walk away from the crowd, the woman grabbed his right arm and pulled him back violently as she tried to speak to him.

The pope grimaced in pain and, in uncustomary fashion, twice slapped her hand to free himself.

It’s not clear what words were exchanged between the two — but the pope appeared to berate the woman in the clip.

“All violence inflicted on women is a desecration of God,” he told the gathered pilgrims.

“How often is a woman’s body sacrificed on the profane altar of advertising, profit, pornography,” he continued, adding that the female body “must be freed from consumerism, it must be respected and honored.”