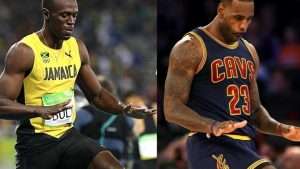 sportsmax.tv- He left Cleveland for Miami, finally became a champion, went back to his beloved northeast Ohio, delivered on another title promise, then left for the Los Angeles Lakers and the next challenge. He played in eight straight finals. No NBA player won more games or more MVP awards over the last 10 years than he did. He started a school. He married his high school sweetheart.

No, that’s not all. Those were just some highlights of the last 10 years. There were many more, as the man called “King” spent the last decade reigning over all others — with no signs of slowing down.

James is The Associated Press male athlete of the decade, adding his name to a list that includes Tiger Woods, Wayne Gretzky and Arnold Palmer. He was a runaway winner in a vote of AP member sports editors and AP beat writers, easily outpacing runner-up Tom Brady of the New England Patriots.

“You add another 10 years of learning and adversity, pitfalls, good, great, bad, and any smart person who wants to grow will learn from all those experiences,” James, who turns 35 Monday, told the AP. “A decade ago, I just turned 25. I’m about to be 35 and I’m just in a better (place) in my life and have a better understanding of what I want to get out of life.”

Usain Bolt of Jamaica was third for dominating the sprints at the 2012 and 2016 Olympics, soccer superstar Lionel Messi was fourth and Michael Phelps — the U.S. swimmer who retired as history’s most decorated Olympian with 28 medals, 23 gold — was fifth.