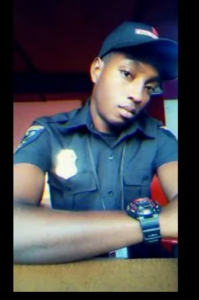 After embarking on an investigation, he found and returned all of the money to the person who had lost it two days later.

“I went over there, looked at it and I said ‘wow!’ When I took it up, what was going through my mind is ‘what if someone left it here for me to find it, and is watching what I’m going to do’. I started looking around to see if anybody looked puzzled. I was there for about 30 minutes with the money, not seeing anyone raising any alarms or anything,” Tucker told THE STAR.

Wanting to review the security footage that would show who lost the money, he informed his superior.

“He was not in the office for the day. There’s an office where he can run back the camera. I told him I found a large sum of money,” said Tucker, noting that up to this point, he hadn’t counted the money. “I didn’t know how much money it was … I just put it back in the bag.”

The guard then realised it would be ideal to know the amount, as this would help him to help authenticate the story of anyone who showed up to claim the money. After checking, countless possibilities swam around his mind.

SOMETHING IMPORTANT
“It’s probably a partner draw that dem did a save for the Christmas … it could be for a surgery or something important,” the Point Hill, St Catherine resident thought. “Imagine how dem feel knowing they lost that money? I was really hoping that I could find the person and return the money.”

Tucker was given many opportunities to pocket the money, but that wasn’t his intention.”The day passed and nobody came to claim the money, and the next day, the property manager didn’t come in again, so I couldn’t see the footage,” he said.

But later that evening, a guard from a different location told him that a man reported that he had lost some money.

“I couldn’t just hand over the money … I started to question him just to get something to convince me. Everything he said connected, but I still wanted to see proof. We ran back the camera and saw where the person stepped out of a vehicle at the spot. We could see clearly that the bag of money appeared exactly after that,” Tucker said.

Afterwards, he arranged to return the cash.

“I called him and told him that I got the confirmation I needed. I invited him to the office to return the money, and he was very grateful and pleased. He was also shocked. He didn’t even want to check it. He just counted out $20,000 and handed it to me, which I was actually grateful for because I was in debt,” he said.