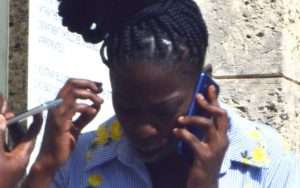 (BARBADOS TODAY) – A New Orleans woman who stole two hams on Christmas Eve and today suggested she had been led astray by the devil, will have to perform 200 hours of community service.

Khadedra Shana Lewis, 24, of 8th Avenue New Orleans, St Michael, was jointly charged with 56-year-old Shonny Susan Philips, of 7th Avenue New Orleans, with stealing two picnic hams from Carlton A1 Supermarket on December 24. While Lewis admitted to the offence, Phillips pleaded not guilty and was released on $1,000 bail and ordered to return to court March 16, 2020.

According to the facts of the case, Lewis entered the supermarket with a shopping bag. She paid for items in her shopping cart but not what she had put in the bag which was tucked away under the trolley. Upon exiting the store, she was searched and the hams were discovered in the shopping bag.

When asked by Magistrate Douglas Frederick why she did it, Lewis responded: “It was probably the devil. I am sorry, I don’t do stuff like this.”

The young woman, who is not known to the court, was ordered to perform 200 hours of community service to be completed by April 24, 2020. She was also given a chiding from Frederick, who impressed on her the importance of being content with what she has.

“This is embarrassing. If you go by somebody’s house, they would give you ham. You can’t eat a whole ham. You need to learn to do without things. Christmas goes so quickly. Jesus was born in a manger with no luxuries. Christmas is about sacrifice. I hope that the embarrassment stops you from doing these things. Even the old-time shoplifters stop because people have cameras everywhere. Don’t start this,” Frederick warned. “There is a fella in prison right now for a salt bread.”