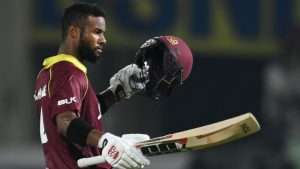 sportsmax.tv- Shai Hope is the most prolific One-Day International batsman to his first 3000 runs the West Indies has ever seen.

On Sunday, during a losing effort against India , Hope struck a single to get to 35 runs and with it, reached 3,000 runs in ODIs.

Sir Vivian Richards, long known as the most fearsome ODI batsman the West Indies has ever seen, took 69 innings to get to 3000 runs, while Lara, the greatest the region has produced and arguably the greatest of all time, took 79 innings to do so. Hope was playing his 67th innings on Sunday.

Gordon Greenidge, who formed part of the greatest opening ODI parternships in West Indies history with Desmond Haynes, achieved the milestone in 72 innings, while one of the greatest exponents of white ball cricket, Chris Gayle took 80 innings.

In fact, there has only ever been one batsman in world cricket to get to 3000 runs faster than has Hope, with South Africa’s Hashim Amla owning the record of the quickest to the milestone of all time, getting there in 57 innings.

Hope would go on to score 42, as the West Indies went on to post 315, a total India got to for the loss of six wickets in the 49th over.

Hope had also scored 102 not out and 78 in the previous two games, taking his tally to four centuries this calendar year, along with seven half-centuries.

The West Indies lost a T20I series to India, 2-1, and suffered the same result in a three-match ODI series that ended Sunday.