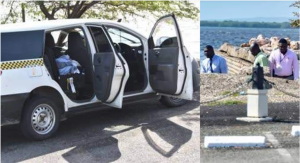 According to Wendy, she tried to dissuade the 62-year-old taxi driver, who operated on the Waltham Park Road to downtown Kingston route, from killing himself. She even pleaded with him to talk to the police.

Her words, though, had no effect on Smith as yesterday he drove the taxi to the end of Hanover Street, at the Kingston waterfront, and jumped into the choppy Caribbean Sea as heavy showers and strong winds swept through that section of the capital city.

When the Observer visited the location, investigators from the Central Investigation Bureau of the Jamaica Constabulary Force (JCF) reported that the police received a 119 call and minutes later, around 7:00 am, Smith’s car was found with a suitcase of clothes on the back seat. His body was found floating in the water.

An Observer source, who identified herself as Smith’s close friend, told the newspaper that he was having domestic problems with his common-law wife with whom he lived on Grassquit Glade off Woodpecker Avenue in St Andrew.

“Him tell mi say him nuh have nuh Christmas, and mi tell him say Christmas Day him can come fi dinner,” the neighbour added.

The friend said that Smith, or “Tall Man”, as he is known in his community, was also having financial problems and was worried that his motor vehicle would be repossessed because he could no longer afford the weekly payments on car a loan.

“Him tell mi say di car nah work and deh a di garage, and him a worry say dem a go tek weh di car. Him couldn’t work fi pay back di loan. Mi tell him say fi pray bout it, but all him a say to me is dat him a go kill himself,” the woman said.

The friend also indicated that most of Smith’s relatives and children live abroad, and that he had recently visited his son in the United States.

“Him have him family a foreign but fraid fi ask them fi help. A just one month ago him guh visit him son, and him mother out here fi di holiday. When mi ask him why him nuh go look fi har, him say him nuh want him mother see him like dat,” she said.

When the Observer visited Smith’s home yesterday a woman who identified herself as his sister-in-law said that his wife was still in shock and would not be giving any comments on her husband’s suspected suicide.

“I am beside myself and his wife is broken,” said the woman. “We are not in the frame of mind to talk right now. The police are doing their investigations so we won’t say anything more,” she added.

Neighbours, however, told the Observer that on Sunday night Smith had swallowed a bottle of unidentified pills and was seen with a rope before people intervened.

“Him did have a rope last night and one a him relative come out here and ask fi a phone call. Them say him did deh a police station last night,” said one resident who gave her name as Dominique.

Kumar Rhoden, who described Smith as his brethren, told the Observer that when he last spoke with Smith last week Thursday he saw no signs that something was wrong with his friend.

“Me and Tall Man ‘reason’ up to Thursday night and him never show me wah a gwan. Him never tell mi say him have them thoughts deh,” said Rhoden. “Mi couldn’t believe it when mi hear dis morning say di man go kill himself.”

According to Wendy, Smith, who was diabetic and recently had one of his toes amputated, had made a previous attempt to end his life last Friday night.