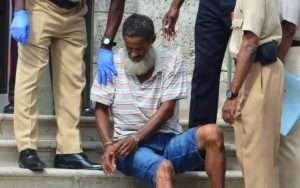 (BARBADOS TODAY) – A man who stole a single salt bread could find himself spending as long as one year behind bars.

This morning, Arleigh Arthur Patrick Todd, 58, of Upper Collymore Rock, St Michael, pleaded guilty to entering the dwelling house of Kim Smith and stealing the bread, valued at 65 cents, on December 9. The offence put him in breach of a one-year bond to keep the peace and be of good behaviour, which carried a one-year prison term.

According to the facts of the case, Smith was at home when she heard a noise in a bedroom. She armed herself with a walking stick and when she went to investigate, she saw Todd with the bread in hand. He retreated to the bedroom and escaped through a window.

When asked by Magistrate Douglas Frederick to account for his actions, Todd, who is well known to the court, claimed that the complainant had short paid him for a job he had done.

“She told me that she had taken money out for lunch that she gave me, but I told her that was not the agreement and I get vex and say ‘well, if that is the case, this salt bread is mine’,” he said.

However, Magistrate Frederick pointed out to Todd that with his antecedents, he had no business going into anyone’s house. He informed him that he could spend some time behind bars because he had breached a bond which was due to expire on January 9, 2020.

“You are looking at a lot of time for a salt bread, I could see the headline now: Man gets a year in prison for stealing salt bread,” the magistrate said.

Todd responded by arguing that such a move would be a travesty of justice.

“If I go to jail you know that the Government has to pay $100 per day to keep me for a 65-cent bread. Where is the justice in that?” he questioned.

The accused was eventually remanded to prison until January 20, 2020, but his appearance before the magistrate had one more dramatic twist. Shortly after exiting the dock, Todd collapsed, forcing the court to go into recess. Prison officers struggled for at least 15 minutes to remove him from the court.