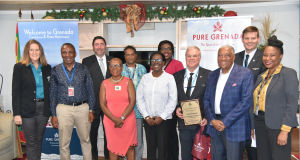 American Airlines has officially launched its new non-stop flight from Charlotte, North Carolina to Grenada. The first flight landed at the Maurice Bishop International Airport at 2:20pm on Saturday December 21 and was greeted by a spectacular water cannon salute. On leaving Charlotte, the Grenada Tourism Authority (GTA) US Sales team presented the full flight of 128 passengers with a taste of spice in the form of Pure Grenada, Spice of the Caribbean bags and inaugural flight certificates. On disembarking in Grenada passengers were also treated to the sweet sound of steel pan music, drumming and local treats as they eagerly looked forward to experiencing the destination’s attractions. Passengers boarding the flight in Grenada also received souvenirs commemorating the first flight.

The flight Captain and crew joined government, tourism officials and specially invited guests for a ceremony in which a commemorative plaque was presented to the Captain by Minister for Tourism and Civil Aviation Hon. Clarice Modeste-Curwen. Deputy Chairman of the Grenada Airlift Committee Sir Royston Hopkin K.C.M.G. also presented the Captain and First Officer with special Grenadian gifts.

Charlotte, North Carolina is one of American Airlines top nine hubs in the United States along with Chicago, Dallas/Fort Worth, Los Angeles, Miami, New York, Philadelphia, Phoenix and Washington, D.C. This new flight and hub will make connections easier from the Midwest and Southern United States to Pure Grenada, the Spice of the Caribbean.

Representing American Airlines at the ceremony was Manager for the Eastern Caribbean, Mrs. CathyAnn Joseph. She said. “This route is a testament to our high confidence in and commitment to the Grenada market.”

In delivering welcome remarks, Chairman of the Grenada Tourism Authority (GTA) Mrs.Brenda Hood spoke of the diverse experiences awaiting the passengers. She said, “We are a destination that is authentic, unspoilt and home to abundant spices such as nutmeg and cinnamon and delicious chocolate. Grenada has many fine hotels, restaurants and attractions that are sure to keep the American Airlines passengers happy and coming back for more.”

Speaking at the ceremony, Tourism Minister Modeste-Curwen said, “The United States remains our number one source market and this flight will serve to further increase not just our visitor arrivals but also offer another flight option for Grenadians.  Each additional flight will offer increased economic benefits to the people of Grenada, Carriacou and Petite Martinique. We look forward to deepening the partnership with American Airlines in the future.”

Prior to the flight’s official launch, the GTA hosted a media luncheon and travel advisor event in Charlotte on October 17, to build awareness of the new air lift and promote the wealth of vacation offerings available on Grenada, Carriacou and Petite Martinique.  The new weekly year round service will operate on Saturdays and departs Charlotte at 9:15 a.m. with arrival time in Grenada at 2:50 p.m. The return flight departs Grenada at 3:52 p.m. and arrives in Charlotte at 7:48 p.m.