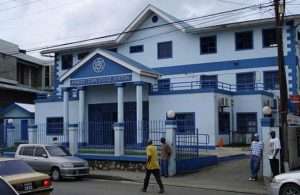 trinidadexpress.com- TWO men waiting on transportation at the Princes Town promenade were caught in the middle of a gunfight with police and a suspected car thief on Friday night.

One man was grazed on the neck with a bullet and the other on the shoulder. They were treated at the Princes Town district hospital and ­discharged.

The incident began on Mucurapo Street in San Fernando, when police responded to a report that a black Nissan Almera car was stolen around 7.30 p.m.

An all points bulletin was issued, and officers on mobile patrol along High Street, ­Princes Town, spotted the ­vehicle.

Police said the officers chased the vehicle and, on reaching Bonanza Street, the driver opened fire on the officers.

Several people were standing on the road, waiting on transportation to get home.

The injured men were assisted by bystanders, who contacted the Emergency Medical Services, police said.

The suspect lost control of the stolen car and crashed into a vehicle near the Princes Town Police Station.

The driver then jumped out of the car and ran into the police station where he was detained.

No firearm was ­recovered.