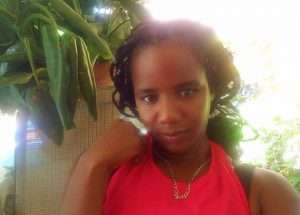 trinidadexpress.com- A Point Fortin woman says she was held against her will inside a grocery after the owner refused to let her leave after she paid for some food items with an old $100 bill.

Despite her pleas, Afeshia Greaves, a mother of three, says she she was terrified after the grocer still refused to let her go.

Greaves says her thoughts were constantly on her two children; a three year old and 11-year old that were waiting for her in her car.

She said, “This incident happened last night between 9:30pm-9:45pm in Point Fortin. I went to purchase a few food items. My bill came up to $102. I paid the man. He already packed the stuff in the bag as I picked it up to leave, I think it was then he realized I paid for the items with an old $100 bill. When I turned to walk out, I heard him telling the other man close to the door and don’t let me out.”

Greaves says it was at that moment things got very scary.

She said, “I told him the money legal and to let me out, but he said no. He said he not taking the old $100 bill, and then told the second man in the store to lock the gate. My child saw when the man locked the gate and began calling my cellphone to see if I was ok.”

Greaves said she repeatedly asked to be let out of the grocery, but she was barred from doing so.

She said, “They didn’t put their hands on me but I wasn’t allowed to leave. I kept telling him he is holding me against my will and the money is legal so why is he doing it.”

Greaves said her children were worried as they saw the man barring the door preventing her from leaving the grocery.

Greaves said she sat down on a case of water waiting to see what the men would do next.

She said, “The cashier kept telling the other one just make sure she don’t leave. There was a lady working there I think she is Guyanese, she pulled out a new $100 bill and told me to give them it. I told her no, I already paid him. If you want to give him the $100 bill then you can go ahead and give him.”

“It was only when the woman gave him the new $100 bill I was allowed to leave the store,” Greaves said.

“This whole incident is very upsetting. I already paid for my items, I wasn’t expecting someone to stop me from leaving the store.”

Greaves said she went immediately to Point Fortin Police Station and made a report.

Greaves, a single-parent, and a carpenter by trade says after a long, hard day at work, she realized she was out of milk, and other essential items.

With Christmas just days away, she stopped to pick up some groceries.

She says she has purchased items from the store many times, but nothing like this has ever happened to her.

The mother of three is flabbergasted that a simple trip to the grocery store escalated to having to go to the police station to make a report.

The Point Fortin Police is investigating, and Greaves is contemplating legal action.