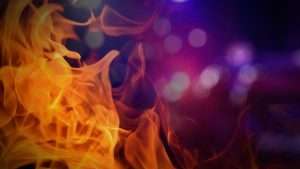 The dwelling house of Saurana Benjamin, 39yrs of Loretto, St. John was completely destroyed by fire on 21/12/19. About 2110hrs, a report of a house fire was received by officers of the Gouyave fire department.  A crew of firefighters headed by Cpl 560 Thomas, responded. Unfortunately, the crew could not get into action due to the steep terrain and bad weather condition prevailing at the time which made the scene inaccessible.

The building was a wooden and concrete structure measuring 24x30ft with four bedrooms, kitchen, sitting room, toilet and bath. The estimated cost of the damage is $150,000.

It is possible that the fire could have been caused by a lit candle which was left unsupervised on a plastic barrel cover. Jammick Benjamin, daughter of the owner of the house, stated that the candle was ‘’burning down’’ so she left to get another one at a shop nearby. She did not get a candle in the first shop so she went further down the road to another shop. While there, the rain began falling which prevented her from returning to the house. She was later informed that the house was on fire.

Officers also responded to a fire at Morne Toute, St. George’s. The three bedroom dwelling house of Andrew Lord 57yrs, mechanic of the above address was destroyed by fire on 21/12/19.

According to Andrew Lord, he and his family left home around 6pm to visit his mother in-law. While still at his mother in-law, he received a phone call informing him that his house was on fire. He returned home immediately and saw his house completely engulfed in flames. He could not say what could have been the cause of the fire as he had left everything intact before leaving home.

The cause of the fire, and estimated value of loss are to be ascertained.

Investigations are continuing into both fires.