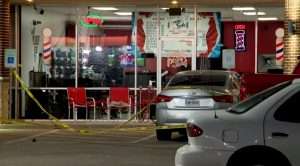 (NBC NEWS) – Police in Texas were searching Monday for a man who they say shot a barber during a dispute over his 13-year-old son’s haircut.

The suspect, who is black, may have fled the scene of Saturday’s shooting in suburban Houston in a four-door gray sedan, possibly a Honda Accord, the Harris County Sheriff’s Office said.

The incident began when the man complained to the barber that his son’s haircut was done improperly, and then decided to go home, Harris County Sheriff’s Office Detective Wallace Wyatt told NBC affiliate KPRC in Houston.

But the man later returned to the barbershop in Katy, located west of Houston, and the barber agreed to fix the haircut for free, police said. An altercation then ensued just before 5 p.m., according to the sheriff’s office.

The employee was shot three times and was listed in stable condition, KPRC reported.

The sheriff’s office did not immediately return a request for comment Monday.

“It’s one of the worst ones I’ve heard,” Wyatt said of the shooting, “especially with your son being here witnessing what you’re doing.”