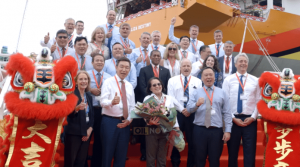 oilnow.gy- The South American country of Guyana has joined the league of petroleum producing nations with the official start of oil production at the Liza Phase 1 Development, announced on Friday December 20 by President David Granger, who proclaimed the day as ‘National Petroleum Day’.

This significant milestone comes approximately five years after the first giant discovery at the Liza field was announced in May 2015, and three months ahead of schedule, making it one of the fastest production ramp-ups in the industry’s history.

“Every Guyanese will benefit from oil production,” Mr. Granger said in a televised address, pointing out that his administration is putting all systems in place to ensure the prudent management of oil revenue.

“This historic development for the Co-operative Republic of Guyana (CRG) is a culmination of substantial investments, perseverance, dedication, ingenuity, and the establishment of the appropriate policy environment that has the capacity to propel our nation towards sustained development,” Director of the Department of Energy, Dr. Mark Bynoe stated.

He said Guyana’s future is bright, but the country can only secure its future by strengthening legislation, conducting due diligence, emphasizing education, following a balanced development paradigm and utilising the best skills in the industry through partnerships.

ExxonMobil initiated oil and gas exploration activities in Guyana in 2008, collecting and
evaluating substantial 3-D seismic data that led to the company safely drilling its first exploration well in 2015, Liza-1.

“This historic milestone to start oil production safely and on schedule demonstrates ExxonMobil’s commitment to quality and leadership in project execution,” said Darren Woods, chairman and chief executive officer of Exxon Mobil Corporation. “We are proud of our work with the Guyanese people and government to realize our shared long-term vision of responsible resource development that maximizes benefits for all.”

ExxonMobil anticipates that by 2025 at least five FPSOs will be producing more than 750,000 barrels of oil per day from the Stabroek Block.

“Through our continued workforce development and community investments, we are making a positive impact in Guyana,” said Rod Henson, president of ExxonMobil’s Guyana affiliate. “We are committed to the use of technology and continued innovation to achieve the highest standards for safety and environmental performance.”

The company said the timely development of these additional projects will ensure that the local workforce and the utilization of local suppliers will continue to grow.

The first phase of oil production at the giant Liza field marks a significant turning point for Guyanese and provides the country with an unprecedented opportunity to change its fortunes and potentially transition to one of the wealthiest nations in the world.

Based on projections, Guyana is expected to earn around US$300 million per year during the period of cost-recovery after which this will significantly increase. Under the PSA terms, the government is set to receive 2% royalty and half the profit oil.

Production at the Liza Phase 1 Development will peak at 120,000 barrels per day. Liza Phase 2 is scheduled to start up in 2022 with double the production output and a third development at the Payara field is expected to get underway by 2023.

ExxonMobil is operator at the Stabroek Block with a 45% interest. Hess and CNOOC are co-venturers at the block with 30% and 25% interest respectively.

Over 1,000 Guyanese worked on projects that culminated with the completion of the vessel. Currently, there are more than 3400 people in Guyana working to support various aspects of the project, over 1700 of whom are Guyanese.