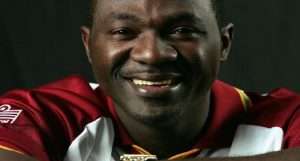 Reports said Browne, accompanied by his wife Tricia, was driving along the Bennetts Road section of the Ronald Mapp Highway in the northwest of the island in the early hours of the morning when his blue BMW collided with a Toyota motorcar travelling in the other direction.

Michael McClean, 37, the driver of the Toyota, died on the spot.

Browne and his wife – who complained of pains to her chest and abdomen – were freed from the wreckage by fire service personnel using the jaws of life rescue tools and taken to hospital by ambulance.

Browne, who celebrated his 49th birthday just two weeks ago, is a successful former Barbados captain who also represented West Indies in 20 Tests and 46 One-Day Internationals.

He more recently served as chairman of West Indies selectors until he was removed in an administrative overhaul earlier this year, following the election of new Cricket West Indies president Ricky Skerritt.