Cuba Gets First Prime Minister Since 1976 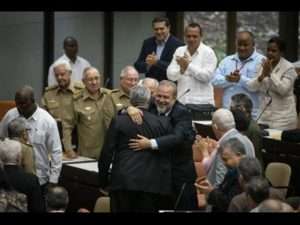 The nomination was quickly confirmed by the Cuban parliament.

Marrero, 56, has been tourism minister for 16 years, presiding over an increase in visitor arrivals and a hotel construction boom that has made tourism one of the most important sectors of the Cuban economy.

Diaz-Canel cited Marrero’s experience in negotiating with foreign investors as one of his prime qualifications, according to Cuban state media.

It was eliminated when a new constitution at the time changed his title to president.

Castro and his brother Raul held the presidential post along with Cuba’s other highest positions, like Communist Party leader, until this year, when Raul Castro stepped down as president.

A fresh constitution has since divided the president’s responsibilities between Miguel Diaz-Canel, who succeeded Raul Castro, and the new post of prime minister.

Under the latest constitution, the prime minister will have responsibility for the daily operations of government as head of the Council of Ministers.

The prime minister will have a five-year term and is nominated by Diaz-Canel and approved by the National Assembly, which unanimously approves every proposal put before it, with one known exception in recent history.