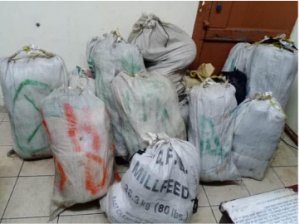 During a search of the area, officers found sixteen (16) bags containing bales of cannabis, strewn through the bushes, just a short distance from the shoreline

One blue fishing boat with a 75 hp Yamaha outboard engine was also identified as the boat involved in the transportation.

The cannabis was taken to the Grenville Police Station, where it was checked and weighed. The cannabis came up to a total of 698 lbs. The boat was subsequently taken by the Grenada Coast Guard.